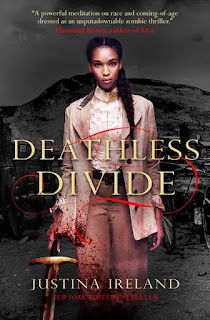 I'm grateful to Titan Books for an advance copy of Deathless Divide.

Seeking refuge in the nearby town of Nicodemus, Jane and Katherine soon find old enemies catching up with them - shamblers without, and humans within...

I loved Dread Nation. In Ireland's alt-nineteenth century, the US Civil War was overtaken by a zombie plague. Young people of Colour are dragooned into training schools, learning to fight the shamblers - and none gives a better fighting education than Miss Preston's, where young women are taught and polished to be "Attendants", defending fine ladies from the undead tide. It is, at the same time, a shrewd commentary on racial prejudice, an exciting (if at times gruesome) fantasy adventure and a fine coming-of-age story.

In taking things forward, Deathless Divide has high standards to meet but in fact it surpasses the first book. Told in alternate chapters from the viewpoints of Jane and of Katherine, this story gives us in effect the tale of a stormy but growing friendship. Spiky and distrustful, Jane makes it hared for anyone to get near her, and her first meeting with Katherine wasn't auspicious. To a degree they are now thrown together. The situation in Nicodemus - another Western town best by shambles - is uncannily similar to that of Summerland, with no way for the young women to escape so that they have to depend on each other. Fortunately, the one thing they each have going for them is their fighting skill, something that enables them to respect each other even when feelings are high.

And then Ireland shakes everything up and this book changes...

Deathless Divide is, simply, stunning. Moving from the plains of the Midwest to the golden state of California, Ireland continues to deepen, and to explore, her imaginary world, while also - and doesn't this seem unlikely but it works so well - using the fantasy, fictional setting to starkly depict the situation of people of colour in the Old West. From the higher prices charged them for goods to being burned out of desirable areas of San Francisco to the ruses mean ing that, despite the abolition of slavery, they're still subject to the control of their former owners, this all feels very real indeed.

The situation is one that Jane and Kate are very familiar with, and they're young women of great determination and courage. They are not about to give up. But Ireland shows the debilitating effect of the inequality. Following events in Nicodemus, Jane is bent on revenge and, having to survive in a pitiless world, she loses pity and does things that are gradually destroying the Jane we first met in Dread Nation. That is the whole crux of the book - Jane's descent, and Katherine's determination (despite their differences and initial dislike) to pull her back. It is, at its heart, a tale of friendship. In Deathless Divide, against a backdrop of horrors, little kindnesses and attentions matter - taking in a stray child (or for that matter, a stray dog). Sharing food. Politenesses that seem more appropriate in a genteel drawing room than on a rough trail. Katherine's determination to continue with her corsets, even if they have to be loser than she'd like.

It's a sweeping, compelling story, that defies the normal fantasy goal of achieving Big Things. Here the Big Things (the driven scientist hunting for a cure for the zombie plague, the avenging bounty hunter tracking down their prey) turn out to be hollow, or equivocal, while the things that make us all human - the things that make life a bit better - are celebrated and bring salvation.