Review - The Library of the Unwritten by AJ Hackwith 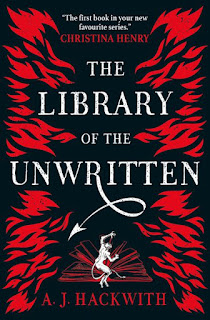 The Library of the Unwritten: A Novel from Hell's Library
A J Hackwith
Titan Books, 11 February 2020
PB, 448pp

I'm grateful to Titan Books for an advance copy of The Library of the Unwritten to consider for review.

The Unwritten Wing, presided over by its Head Librarian, Claire, is where all the unfinished - and completely unwritten - books are stored.

It's also situated in a corner of Hell...

The Library of the Unwritten features an entertaining - and slightly scary - band of characters: Claire herself (who as a Librarian is of course pretty formidable), her apprentice, Brevity (an ex-Muse), the angel Ramiel ("The Thunder of God"), novice demon Leto and Hero, who has absconded from his book. (We soon learn that Claire is as much jailer as Librarian, responsible for preventing Characters from escaping their books and wandering the world). While in some ways an odd bunch, they're also reassuringly normal - Brevity suffers panic attacks, Hero is a bit of a poser, Claire has a dazzling sense of duty but is driven by something that I can't say any more about because spoilers, Leto is a vulnerable teenager on the cusp between humanity and demonhood, and Ramiel has spent earns repenting a mistake and trying, with little success, to earn forgiveness. Together they squabble, battle and and hunt their way through a succession of the Realms of the afterlife, hunting for a dangerous - and forbidden - book.

This gives Hackwith the opportunity to set up some intriguing - and exciting - encounters. What happens, for example, when an angel or a demon wanders out of its own context and ends up in Valhalla, or an an Ancient Greek underworld? You'd think it could be something off a mishmash - but in fact Hackwith deploys a forensic logic throughout, which, coupled with the strong characterisation here, makes even the most unlikely scenarios plausible.

As the hunt for that most threatening of books proceeds, Claire and her team are forced to confront parts of themselves they would rather not, or which they have managed to forget, and to reflect where their true loyalties and loves lie. Even Hero, who sprang fully formed form his book, proved to have regrets and unfinished business and also something to prove out in the real world. There are some shocking revelations. Our heroes (and Hero) are also pushed to their wits' end to protect the Library, which is also, it seems, in danger.

There has been a mini wave recently of fantasy featuring resourceful librarians and the importance of books, which is not surprising I think as librarians are important people as are books (yes, I do mean people, books, here, ARE people). It also reflects the delightfully fluid, ambiguous nature of books and reading as both reflecting and creating reality. The Library of the Unwritten is a worthy addition to these, bringing to the genre its own distinct strand of ethical and theological commentary which underlies everything the team here get up and means their actions have visible and serious consequences.

It's all great fun and I look forward to seeing how this series evolves in future books.

For more about The Library of the Unwritten, see the publisher's website here.