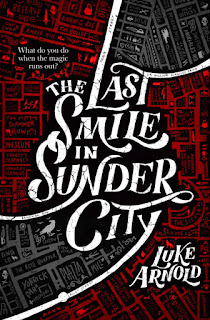 I'm grateful to Nazia at Orbit for an advance copy of Last Smile in Sunder City.

Fetch Phillips is a Man for Hire, a detective of sorts in tough Sunder City. Sunk in drink, sleeping in a corner of his office, walking the mean streets, he seems a familiar type - but he's not exactly what you might expect. Sunder City is heavily populated by non-humans - Dwarves, Sirens, Vampires, Fae, Gnomes and more. Which is as well for Fetch because he won't work for humans.

Last Smile is as much about how this came about, about Fetch's history and motivation, as it is about his attempts to trace missing vampire Edmund Albert Rye. And that history is, in turn, linked to the state of Sunder City (and the wider world).

And Fetch? Fetch thinks it's his fault.

How and why that is, he tells in a number of episodes brought to his mind by the events of this book - from the death of his parents to his escape, years later, from an Opus jail. I'm not going to spoil any of that, except so say that it leaves him bearing a heavy burden of guilt at humanity's - and his own - treatment of the non-humans, and a desire to make amends and to 'Do some good'. That guilt is a strong motivating factor and it is one of the features of the book which, I think, actually marks it out as being different from the noirish thriller that it might others resemble.

The consequences of the magic being gone are many and severe. The creatures that depended on it for life are dying, many of them slowly and horribly. Others used it to make a living and they are now destitute. More subtly, things are going wrong in the world - crops are not growing as they did, for example. Yes, it's a bit of a parable of environmental devastation but here it happened very quickly, six years ago, and while it wasn't down solely to him, Fetch feels a very personal responsibility.

That makes him less of a detached figure - more complicit - than the 'man who is not himself mean' walking those streets. It makes Fetch, at times - many times - a rather unsympathetic character. While you can understand what happened to him and what he did, it's hard not to gloat, a little, when he gets into fights and has his backside handed to him, or ends up robbed and unconscious in the gutter. (I think he feels a bit the same way, to be honest). He's not the disinterested PI, grubby but with a heart of gold, that you might expect. Even in this book, he does mean, ungracious things.

While we meet the usual sorts of secondary characters for a slice of noir - corrupt cops, City officials, a trodden-down mother whose little girl has vanished, heavies in bars (oh so many heavies, oh so many bars) and even an enterprising chap trying to establish a diner close to Fetch's office - there is more going on here. Keep an eye out. Look for the clues, even as you enjoy Arnold's hardboiled dialogue or wince at his injuries. Or as you enjoy the unfolding of this world where Arnold has very cleverly integrated the various ex-magical species' natures and histories and hinted at previous conflicts, rivalries and betrayals.

In one or two places the plot did jolt, with threads left dangling. We hear a lot about a woman with whom Fetch was in love but whom he lost. I'm not going to say too much about that because, again, spoilers, but I lost track of how and when that important event happened - I'm pretty sure we're simply not told. Similarly a catastrophic event occurs in Sunder City but there seems to be little or no aftermath.

The book is, though, an excellent read. The premise - that loss of magic - is intriguing, provides lots of practical and moral issues and Fetch is a protagonist with the real depth. The book is atmospheric, great fun, and clearly going somewhere interesting.

For more about the book including links to buy it, see the Orbit website here.