Review - The Catch by Mick Herron 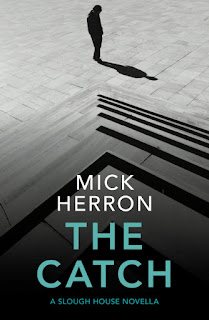 I bought my copy of The Catch.

Even seeking, as I do, to look ahead at what books are coming up, I still sometimes get surprised (and it's always a nice surprise) as I was last weekend when I spotted The Catch in an Oxford bookshop.

While it's set in Herron's Slough House universe - that being the repository for the failed spies and burned out cases of the Security Service - this book and its predecessor, The Drop, are really a little sequence of their own. John Bachelor, the main character here, is certainly washed-up enough to belong at Slough House but he has fallen through even that safety net and in The Drop we saw him only a misstep away from sleeping on the streets. Bachelor was saved form that by taking over the flat of an ex-asset who he's been looking after and who conveniently died, but there's always payback and in The Catch, Bachelor wakes to hear the first of the Service knocking on his front door.

Or rather, on Solomon Dortmund's (RIP) front door.

From that moment we're back in Herron's usual, convoluted, battle of wits. Bachelor knows the Service have him bang too rights - but is there anything about the way they've approached him, about who's approached him, most of all, about what they've asked him to do, that might give him an edge?

It's a clever story, right up to date with current events. The "request" made of Bachelor is for him to track down an ex burglar and blackmailer, someone he should have been monitoring anyway but hasn't - so now he has ground to make up.

I really enjoyed this little slice of Service life. We've seen in the conventional Slough House novels those times when the authorities at Regent's Park need to bring in Jackson Lamb's dregs and sweepings, and we've seen them acquit themselves well, but we shouldn't conclude from that that the Park are always incompetent.

Nor should we conclude that Slough House is where all the sleaze belongs. By the end of this story we'll have encountered plenty of that and, as I said, it's very topical stuff.

Perhaps a degree less noirish than the main Slough House novels, The Catch (The Drop) are deeply atmospheric, following Bachelor from pub to pub across London as he seeks his quarry, showing us a shady world of men who don't have quite enough to do, or enough money to do it with, or frankly, anyone to care what they do.

Things don't look too good for John Bachelor - when I read my next Slough House book I'll be thinking of him out there somewhere and wondering if we'll ever meet him again.