Review - Gods of Jade and Shadow by Silvia Moreno-Garcia 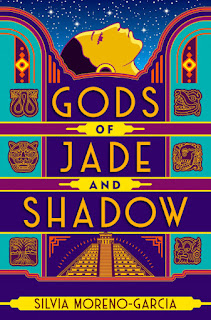 I'm grateful to the publisher for an advance review copy of Gods of Jade and Shadow via Amazon Vine.

It begins with a woman...

It begins in Mexico.

Casiopea Tun is a young woman, very much the poor and unwanted relation in a sprawling family living in a remote town. The Revolution has left Mexico avowedly secular, but little has changed in Uukumil; by command of the local priest, women are to cover their shoulders at all times.

Casiopea has a life of drudgery with few prospects of improvement. She years to dance to jazz music or to drive a car, but none of this seems likely. Reflecting on the books she's read, she strongly rejects the idea that she's a Cinderella - she isn't waiting for any Prince, but things will get better!

When change comes, Casiopea is proved right - it's not a prince who disrupts things but a Mayan death god, Hun-Kamé, with whom her family fortunes become tangled. So begins a sort of road-trip (more a rail-trip, actually) across Mexico, Casipea pursued by her indolent cousin Martín, Hun-Kamé by his murderous brother Vucub-Kamé. The fugitives encounter a series of natural and supernatural obstacles including villains, demons, magicians and killer plants as Moreno-Garcia weaves a story that is part fairytale, part heist, based on Mayan legends and myths but infused with the spirit of the Jazz Age: the spirit of an indomitable young woman who feels her time has come and who simply won't be dragged back to her grey town to wash floors for the rest of her life.

I really enjoyed the relationship the Moreno-Garcia sketches between Casiopea and Hun-Kamé - no, I know what you're thinking, but it isn't quite what you expect - as well as the matter-of-fact way she integrates the Mayan past with a very materialist present. There's no idealisation of a society that practised human sacrifice, but nor is there any patience for the discrimination she shows against Indigenous peoples. In the persons of Hun-Kamé and Vucub-Kamé we effectively hear an ongoing debate about the past and the future, and Casiopea herself contributes to that, effectively having the last word on many occasions.

I would perhaps have liked to hear more about Casiopea's mother who is an important character early on and, I felt, could have had more to say about the situation she and her daughter were in. And I definitely felt at the end that she should have had more recognition. That apart, the book is fun, often raucous fun, as a young women grows up, learns about herself and teaches some lessons in return to those who are older but not necessarily much more wise.

It is, in many respects, a fairytale, with Casiopea showing the best fairytale virtues of self-reliance, courage, quick thinking and kindness, despite living in a world which has treated her very harshly.

The last book I read by Moreno-Garcia was The Beautiful Ones, a romance of manners set in a magic-infused vaguely alternate Europe. Gods of Jade and Shadow is miles away from this in almost all respects, and overall I'd say it succeeds brilliantly, showcasing this author's versatility.

For more information about the book, including links to buy the book, see the publisher's website here.
Email ThisBlogThis!Share to TwitterShare to FacebookShare to Pinterest
Labels: 1920s, 2019, gods, journey, Mayan folktales, Mexico