#Blogtour #Review - The Rage of Dragons by Evan Winter

The Rage of Dragons (The Burning, Book 1) 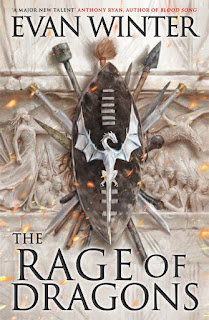 Today I'm joining the blogtour for Evan Winter's fantasy debut, The Rage of Dragons. I'm grateful to Nazia at Orbit for sending me an advance copy of the book and inviting me to take part in the tour.

I tend not think of myself as a reader of epic fantasy but I can be persuaded if the book's something a little different, so I took notice of this.

The Rage of Dragons is indeed very much a work of epic fantasy, and viscerally military fantasy at that - it's also a bit of a break from the Northern European template that's often assumed. Winter's story draws instead on different mythologies, settings, language and characters to give us something arresting and fresh.

Tau is a young man in a deeply hierarchical, military-focussed society, that of the Omehi, who are locked in a bitter war with their enemies the Hedeni - enemies whose land they took hundred of years before.

Defending their barren land, backs to the sea, the Omehi wield both military strength and deadly supernatural gifts.

But still, they are slowly losing the war.

I enjoyed meeting Tau and following his journey from shambling young man to powerful, driven warrior. Well, maybe 'enjoyed' is the wrong word. As Tau's life unravels and he takes his first steps down a grim road - a road of discipline, effort and darker, and yet darker, experiences - we see how he changes, what he holds on to and what he lets go. It's a gripping, arresting progress, psychologically true and at times heartbreaking. Winter's writing is never less than vivid, whether describing a battle or evoking the awkward friendships of young men or the arrogance of the gentry (Tau is a Lesser, despised by the Nobles for all that they rely on him and his kind to lay down their lives in the war). And this vivid writing carries the story forward, leaving the reader both dreading and anticipating the next fight, the next humiliation, the next injustice.

It's a pitiless story in some respects, with a great deal of loss and sadness, but it is redeemed by moments of tenderness, loyalty and even self doubt. For most of the book, Tau is consumed by and focussed on his own quest for revenge - not so much trying to find his place in his society as survive it and conquer. At times the things he does, the risks he runs, in this cause almost made me gasp - but while it may not be a new device, the search for justice is one that Winter uses very well to open up this world to us. In any book that, like The Rage of Dragons, seeks to portray a whole society and show how large scale events and the personal intermesh the reader needs an anchor, someone to identify with and both challenge and love the world that's shown. Someone to be our channel to understanding what's going on. With Tau, Winter succeeds magnificently: there really are only a few moments in this story where it feels as though one is being briefed, and mostly we're left to absorb the structures of Omehi society organically (there is a glossary if you find yourself forgetting the difference between Ihashe and Indlovu).

Overall, an exciting, pacy and involving debut, a very strong start to a trilogy - and, yes, just to be clear: here be dragons!

For more info about The Rage of Dragons, and an excerpt, see the Orbit website here.

You can buy the book from your local bookshop, including online via Hive Books or online from Blackwell's, Waterstones or from Amazon.

The blogtour continues, and there are many more excellent posts and reviews to catch - see poster below for details.