I'm grateful to Sarah at Titan Books for a free advance copy of The Spider Dance to review as part of the blogtour.

This is the second book in Setchfield's series about British agent Christopher Winter. In the War in the Dark, Winter discovered a new and unsuspected front on which the Service was fighting, a supernatural front, and that he had, in a now lost persona, been intimately involved in that struggle.

In The Spider Dance, we learn more about magician Tobias Hart, the man Winter used to be. Winter has attempted to escape the Service and start a new career as hired muscle to a firm of gangsters (this is London in the Swinging 60s) - but when things go wrong, he's drawn back in to the deadly dance...

I loved it that the central character in these stories has had, and lost, great power; is disgusted by that power and what it can do, and reluctant to awaken it; yet is forced to do so. Winter is a partial hero, a man more seeking to survive, to find safety, and to come to terms with his past, than to triumph - at one point in this story he effectively becomes a well paid hitman in the supernatural world. He's caught in a world where allies, ex friends, and enemies all seem to know who he was and what he could do, yet he doesn't know himself. In a vicious world filled with monsters and the supernatural, Winter seems well out of his depth and it isn't clear there he'll find the knowledge power he needs - or whether he even wants to.

Anton aspect that caught my fancy is Setchfield's skilful blessing of the tropes of the gangster novel - a "gentlemanly" crime family head with all trappings of piety, but whose hands are nonetheless filthy, an illicit trade in certain substances (though not quite what you'd think), a city in fear - with those of horror, in this case horror associated with particular monsters. This one is more crime than espionage, despite some early chapters behind the Iron Curtain (which nonetheless capture the authentic atmosphere of a 60s Cold War thriller).

In some respects it's a simpler story that The War in the Dark. There, it wasn't clear exactly what was going on, Winter's secret history was still, well, secret, and there were clearly several factions but we didn't know who they were. Now, a lot is out in the open (if if details remain obscure) and it's less a matter of Winter learning that his supposed life was a lie than of him living with the consequences. So The Spider Dance is more straightforward, but no less readable and the character of Christopher Winter, as Setchfield draws him, is a fascinating and subtle one.

Great fun whether you're into thrillers or horror and - of course - just the thing if you like a blend of the two.

To find out more about the book or order a copy, visit the Titan website here. 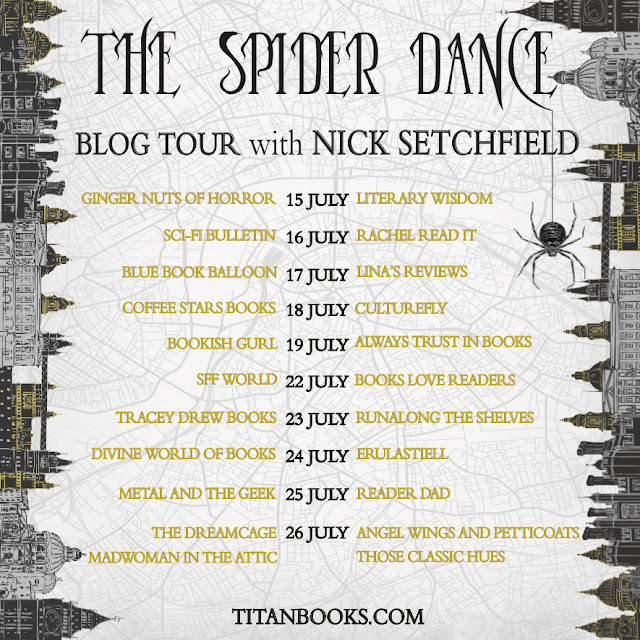