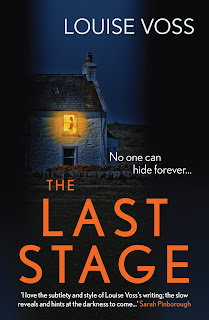 I'm grateful to Orenda Books for a free advance copy of The Last Stage to consider for review and to Anne Cater at Random Things Through my Letterbox for inviting me to take part in the blogtour.

I live in a part of the country sometimes used for filming the ITV cosy crime series Midsomer Murders.  We're used to seeing film crews in the village (once, my wife actually met Sykes the dog!) and I enjoy watching the programme, trying to spot where things were filmed. So I found the setup of this book quite familiar. An 80/ 90s superstar, Meredith Vincent, dropped out of music after a frightening incident and now lives a reclusive life in a pretty village. Something awful happened to her back then and she guards her identity: only her brother Pete knows who she really is and she works in the gift shop at the local stately home, satisfied to be out of the limelight.

Then bodies begin turning up... you can see that happening in MM and the book even draws attention to that.

BUT. There is much more than that bare plot going on here. Voss has written a seriously tense, complex and threatening book, drawing out not just the who and the what - who is responsible, who is next - but on a deeply imagined, convincing, and disturbing backstory for Meredith. The book  visits first the early 80s of her teenage years where she bunks off from school on her 17th birthday, blithely unaware of impending tragedy at home, to join the peace protest at Greenham Common. It moves forward, in flashbacks throughout the book, to the career of Meredith's band Cohen, which we see emerging and leads up to that horror from she is hiding.

These chapters establish an atmosphere of guilt and mystery, and also explain why Meredith was estranged from Pete for so long. When I learned of her family tragedy I felt particularly for her, I went though something similar myself though a bit older and it is a hard thing. Voss is good on teenage self-centredness and its overlap with denial - there is a sense in which Meredith has spent her life running away not only from whatever it is menaces here, but also from the truth about herself. The events of this book will bring her face to face with all that but after spending so long running, will she be able, finally, to accept what happened?

Meanwhile back in the present, Meredith becomes entangled in a series of events which start off as embarrassing and guilt inducing and rapidly take a turn for the horrific. There are secrets here and buried enmities and Voss does a terrific job of showing us how they insidiously corrode relationships, draw down danger and hurt even the innocent. In particular Meredith's replaying of that incident - which is seared into her, almost to a PTSD extent - is shown vividly and chillingly. We can see, can feel why it remains with and why, when things begin to go bad at Minstead House she is simultaneously in denial and paralysed. She does some very foolish things as a result, but it's hard to blame her (one of the things that can disappoint in this kind of book is when the protagonist doe something silly just to move the plot: that doesn't happen here, if you have any empathy at all you'll exactly see where Meredith is coming from).

As well as the general air of tension and the portrayal of Meredith, I also enjoyed the subplot featuring two young police officers, Gemma and Emad, who are at the centre of the enquiry (in a refreshing touch they're quite junior, so get plenty of hands on experience but are not in charge).

It is, overall, a well told, tensely plotted and very interesting piece of crime fiction with a distinctly Gothic tinge and for the, the 80s roots of the story felt like coming home in many ways (I worked out that I'm either the same age as Meredith or a year younger).

I would recommend this to anyone interested in English country village crime who wants to go beneath the surface and experience the darker side to some of these places, with a bit of psychological bite and some real tension.

The tour continues, with further great stops coming up as you can see from the poster below!

You can - and you should - buy this book either from your local shop, including via Hive, or online from Blackwell's, Waterstones, Foyles or Amazon. It deserves a place on your shelves. 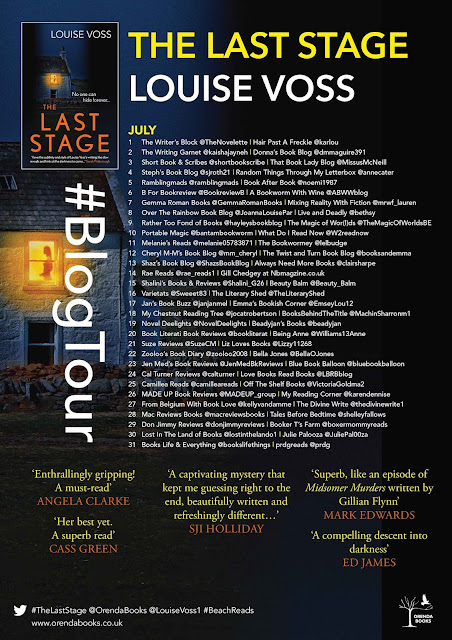