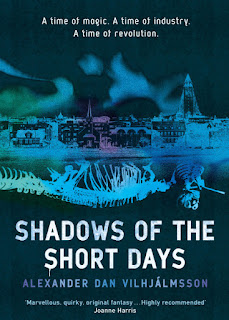 Shadows of the Short Days is set in an alternate Iceland where instead of geothermal power, magic - seiðmagn - wells up from the ground and is harnessed to industrial and military use. While details are kept vague - everyone knows this stuff, right? - it's clear that the seiðmagn is toxic, mutating wildlife and poisoning the ground. Whether this has always been the case or there has been some recent cataclysm is not stated. The island is occupied, forcibly incorporated into the Kolkar "commonwealth" and one suspects it is that magical energy that they really want - possibly it is a rare commodity? Much of the motivation for the story is struggle against that foreign occupation and the oppression it brings.

This political setup of course reflects, to a degree, Icelandic history and the movement for independence in the 19th and 20th centuries. Fittingly then, the two central characters are both, in their different ways, rebels.

Garún is a "blendigar" - half-human, half-huldufólk, and subject to prejudice and discrimination on that ground. Huldufólk are something like are elves (one feature of this book is that the mythological creatures and things tend to be labelled in un-translated Icelandic - for example we also meet "Marbendill", which are mermen/ maids. While there is a glossary at the end, it was fun to encounter these creatures and concepts, which are very stark and strange, in a foreign language). There is a whole backstory to the huldufólk explaining why they're so reviled, hooking into a wider history of this alternate world. Garún is firmly part of the revolutionary movement, spending her nights grafitti-ing magical sigils across Reykjavík to provoke dissent and unrest. By day she's a struggling artist and a member of a Bohemian underground fuelled by the consumption of magic-infused drugs. (Vilhjálmsson has some powerful scenes documenting this). She also has a rather sad backstory - Garún is overall a very well rounded character with whom I strongly sympathised, her sense of rejection as a blendigar and the prejudice she meets coming through strongly.

Sæmundur, the other main protagonist, is equally well drawn although he's difficult to actually like. Sæmundur - obsessed, driven - is a student and part of the same set as Garún (they were together but split up several months before). He's more focussed - even fixated - on developing his magical abilities and studies at Svartiskóli, effectively a university devoted to "Galdur", a branch of magic concerned with the invocation and manipulation of demons. Sæmundur is at loggerheads with his teachers who regard him as a loose cannon, likely to go his own way and meddle with Things Better Left Unknown (they're basically right about this).

This world that Vilhjálmsson draws is, then, intricate, well thought out, and immersive. We can feel the wrongs being done to the people of Reykjavík (the city is surrounded by a wall, the better to maintain control). We can hear the beat and smell the drug-laden air of the parties Garún attends, taste Sæmundur's rage at being judged by his teachers, see the prejudice directed at the blendigar, huldufólk, Marbendill and other non-humans. It's a very strong background, and makes the story thoroughly credible and absorbing. That said, I did regret that there is almost no material from the viewpoint of the occupiers - a couple of scenes at most - which means their movements, motivations, reactions and plans are almost completely missing. The effect is that the resistance movement of which Garún is part seems simply to be kicking at a monolith. That doesn't make for any lack of drama, though: the scenes that describe the eventual conflict are excitingly written and pacy with real tension and terror for our group of rebels.

And I think terror is the right word - this book is very dark indeed. The opening section, showing Garún and Sæmundur going about their lives, gives a rather deceptive impression, suggesting that the darkness is only an incidental theme while it is, I think, actually rather the central feature in this book. Set around Icelandic Midwinter that's also rather fitting. But in the end this is I think a very bleak book even if it is a magnificently bleak book. It is certainly an enthralling and tasty read, genuinely different from the run of fantasy. You could, perhaps, fit it into the Lovecraftian things-from-beyond-time template, or the dystopian pattern of an oppressive state but that doesn't really work, this is a book that speaks for itself and - especially once that introductory third is past - both excites and appals with its weird, weird appeal.

A definite recommendation, you need to read this.

For more information about the book, see the Gollancz website here. 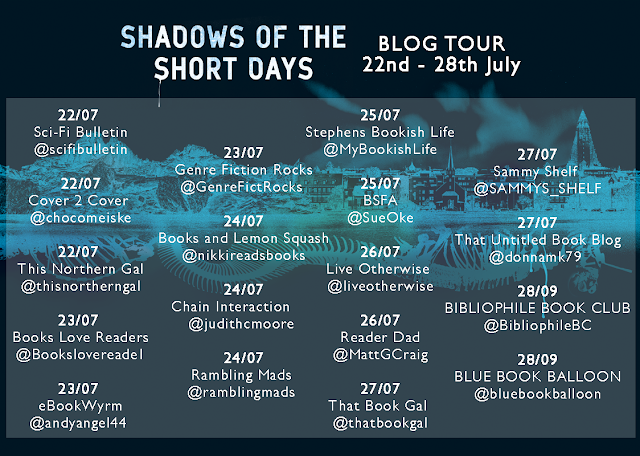