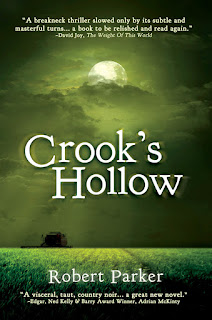 I'm grateful for an advance copy of Crook's Hollow for review.

I wasn't sure exactly what to expect when reading Crook's Hollow - a thriller, a crime novel or possibly something a bit folk-weird? In fact it's firmly the former, focussing on Thor Loxley, the youngest member of a farming dynasty in the eponymous Hollow. "You should have got on with it" he keeps being told as various ingeniously engineered attempts on his life are made.

But what should he have "got on with"?

Who cares enough to want to kill him?

And what can he do about it?

The story begins in the middle of one of these attacks, opening with some exciting action, and then, if anything, the pace just accelerates. We hear about Thor's family and their rivalry with the slightly loner established Crooks, about Thor's dalliance with a Crook woman, Roisin, and about his estrangement from his own family. Plenty of suspects there, and more come along with whispers about land deals, and childhood rivalries.

It is, perhaps, a bit Midsomer Murders in that sense - the traditional English village seething with generations-old hatreds. Here, though, it isn't a benign outsider of a Detective Inspector who has to sort things out, Thor is soon backed into such a position that he has to do it for himself. It's an exciting and action filled read.

I do think the reader has to suspend disbelief in a couple of place - in particular, a Loxley family custom results in Thor's estrangement from his family, but I don't really get a strong sense of why he acted as he did, of what made him turn his back on them. But with a cliffhanger never far away and a mystery hanging over the story - just what is going on, and who is behind it? - that's not difficult. Anyway it's overshadowed by the fact that the killer just won't give up.

(There's also the centrality of the church in village life here - I'm married to a vicar but I don't think I could argue that things are like this in most places! Indeed I wonder if that's a hint that - despite its modern trapping - Parker had the past in mind when writing his story? There's noting in it, I think, that requires it to be set in the present day.)

It is a short book, at 200 pages, busting the tendency of crime to generate thicker and thicker books - well judged, I'd say, given the pitch of the tension: it would be difficult to sustain the central device of the attempted killings for much longer than this and instead Parker gives us an exciting climax which brings wider danger to his imagined community, and wraps up his story neatly.

Crook's Hollow: a place you might visit, but you probably wouldn't want to live there.

For more information about this book and to purchase copy see the publisher's website here.