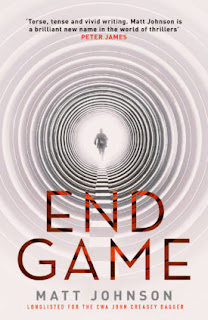 I'm grateful to the publisher for an advance copy of the book and to Anne for inviting me to take part in the blogtour. (Full disclosure: I also reviewed the previous two books in the series for their tours and one of my reviews is quoted in this one).

End Game, as you might expect, brings to a close the trilogy of books (Wicked Game, Deadly Game) featuring Detective Inspector Robert Finlay, ex SAS. If you've read those you will want to read this and see how things pan out - I can tell you that this book is every part as twisty, as tense and as gritty as they are. If you haven't read them then, first, shame on you and, second, let me try and persuade you.

NB I will warn when approaching spoilers for the first two books - read on without fear!

End Game opens in 2002 with Finlay in the middle of an operation as part of his Scotland Yard anti-trafficking unit. The action very quickly moves back to the conspiracy that has dominated the three books: the mysterious document in Arabic whose existence must be protected, the string of murders, and all the cross purposes, suspicions and double motives among the police and MI5 officers.

As in the previous books, Johnson adopts a risky - but in his hands, successful - strategy of seeming to show us everything, narrating things from Finlay's perspective in the first person but also giving other characters' viewpoints in third person. So we'll get Finlay's take on a meeting and then read something like 'After Finlay walked out, Grahamslaw picked up his phone...' At other times we don't get this seamless transition but we do see what the antagonists (not naming them because that's a spoiler for the earlier books) are up to. They are though distanced by that third person voice. The result is that the reader identifies strongly with Finlay but also knows more than him - which is, as I said, a risky thing for an author to do but works well here, helping to emphasise the general murkiness of the world that Johnson creates (and building tension by showing just how deep Finlay's in - something he doesn't realise till very late in the book).

Yet some things are kept back from the reader: there are aspects that aren't revealed, leaving us, too, worrying about what is happening and why...

That murky world is one of the strengths of these books. Struggling to think of a way to explain it, I can only think of comparing the book to other genres. This book and its predecessors are clearly thrillers - set in modern London, they have guns, cops, spooks, ploys and tension. Yet there's also something of the fantasy about them. No magic or anything like that, but the atmosphere evoked isn't far off one of those stories where assassins roam the capital with impunity and the characters accept that anything can happen. For example (and this is a mild spoiler) people have been killed to protect the secret of that document. In a certain sort of thriller this would be the central scandal in itself: State sanctioned murder! It must be exposed! How do we get the truth out there?

Yet here it is very much taken for granted as the kind of thing that might happen and nobody wastes time getting outraged. Rather they process the facts and consider what it means for their safety and that of their families. At one level that's rather liberating, at another it makes for a very grim, dangerous world.

If somebody died, was it an accident? A suicide? A simple criminal act?

Or were State forces behind it?

If so, was that sanctioned or does someone have a private thing going on?

This ambiguity creates a whole world of doubt quite aside from the realities of what happened.

It's a very strong premise for a thriller, a world where nothing is off limits (in the previous books Finlay has basically mounted Special Ops actions under the radar and got away with it, and the bad guys here are just as prepared to do the same). In End Game it becomes even more iffy than in the previous books because new players join the deadly game - in particular a hunter from Complaint Investigation Branch who's got it in for Finlay and his friend, Kevin Jones. Between that hostility, the ambiguous roles of the various MI5 officers and a suspicion that he's being bugged, Finlay has a lot to worry about from the start.

And he's right to be worried. There's no safety net in these books, no margin for error. Past mistakes won't go away, cupboard doors swing open to reveal their skeletons, the skies are filled with chickens coming home to roost. It's all very compelling and amidst the mayhem Johnson does a very good job at tying up the many plot threads from the previous books and bringing things to a satisfying end (insofar as an end can be - I wouldn't say no to more stories about Finlay!) I wasn't sure if, in the end, we ever quite had an explanation for the full importance of that document, but maybe there are things it's better not to know...

Taken together the three books are a considerable achievement, all the more impressive given that they are Johnson's first books - he had an extensive police career before turning to writing and they arose from his need to process what he'd been through and confront his PTSD. I don't mean that to be faint praise of the "good books considering..." sort: they are good books, full stop. The octane is so high that if you sniff this book too hard you're likely to ignite. In particular Johnson's first person/ third person style makes the story come over as very visual and the chicanery and multiple agendas here presents here aren't a million miles from the world seen in current TV hits like David Hare's Collateral.

Which - given Johnson was in the Met and presumably closer to some of this stuff than Hare - might be just a teeny bit worrying... but thank goodness it's only fiction. 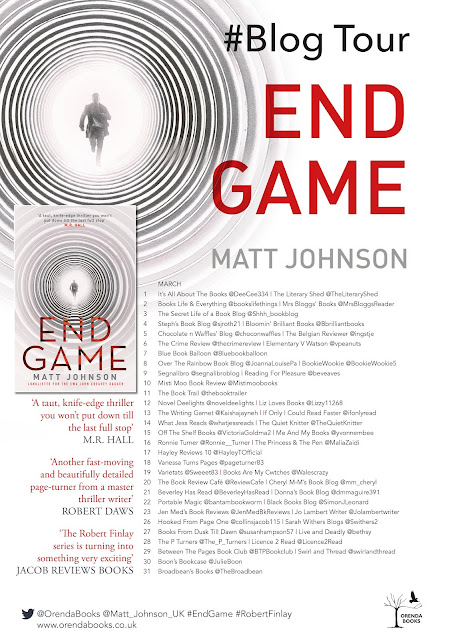