Review - The City of Brass by SA Chakraborty 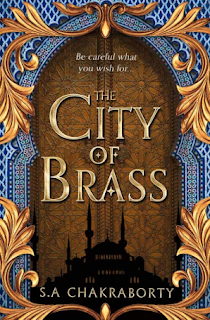 I'm grateful for an advance copy of City of Brass via Amazon Vine.

City of Brass was a wonderful book to read but - like many of the most enjoyable books - is difficult to review!

A fantasy, it's set during the Napoleonic occupation of Egypt (although this is really background that hardly impinges on the story).

Nahri is a young woman who survives as a thief, huckster, healer and a dozen other things in the slums of Cairo. As the result of a chain of coincidences (I think - there may be more to learn about this in future books...) she summons a djinn, Dara, who is bound to serve her family - and attracts the attention of its ancient enemies. Dara wouldn't call himself djinn, no, he's a daeva (not a diva, though from his behaviour you might struggle to see the difference).

The two are immediately hunted by the deeply scary ifrit, and we're plunged into a world of magic, ancient family feuds, murder, rebellion and unchecked slaughter with a backstory stretching the remote time of Suleiman, who tamed the daevas long ago.

It was, to me, a deeply alien fantasy and therefore exactly what fantasy should be. No cloaks, bear fur, snow or grim, grey Northern castles. This story is rooted in Middle Eastern culture, the djinn (mostly) having an Islamic background and the families, feuds and political factions of The City of Brass echo that. Chakrabortty exploits this with skill, rooting her story in a believable past and giving all of her characters convincing histories and motivations (and dilemmas).

There are no cardboard cutout goodies and baddies here. Dara, who is handsome, awesomely competent with his weapons, and Nahri's protector, has also done some truly wicked things, even unforgivable things. Nahri discovers that her family also had that blood on its hands. Yet King Ghassan, whose ancestors overthrew her tribe's rule centuries before, also has secrets. Actually, everyone here has secrets - and nobody (except, perhaps, Nahri herself - beyond a little thieving) has clean hands.

There are also credible tensions between the factions of the djinn, and the half humans ("shafit") with privilege, prejudice and history dividing the population.

The story is I think (and this is only the first part of a trilogy - things stop pretty much on a cliffhanger) proceeding on two fronts. Nahri, the outsider, is exploring this strange new world, to some extent as a proxy for the reader but increasingly as a force in her own right. As she discovers who she really is, and the labyrinthine politics and social tension that drives both djinn society, and Daevabad, the City of Brass itself, is unfolding. Naturally these come into conflict and the naive and ignorant young woman we meet at the start of the story has to grow up very fast if she's to survive at all, let alone flourish. But she shows every sign of being able to do that.

In case that makes it sound as though the book is dark, well yes, at times it's very dark. But Chakraborty also supplies some wonderful descriptions of the City itself - surely one of the great fantasy creation of recent times - as well as a wicked vein of humour, especially when it comes to the bickering djinn themselves and the fates that can befall them (open the wrong scroll at the wrong time and you can be turned into an apple, apparently a terrible insult; in Nahri's infirmary, on a pile of sticks, sits an unfortunate djinn who will slowly turn into a bird unless she can find a way to save him)

On the evidence of City of Brass, Chakraborty is a major new talent in fantasy and I can't wait for the next volume in this series.

For more information about City of Brass see the publisher's website here. You can buy the book from your friendly local bookshop, or here, here or here.