Review - Arm of the Sphinx by Josiah Bancroft 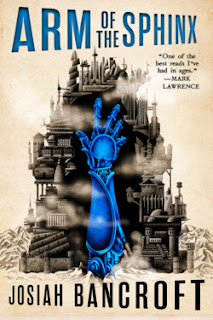 I'm grateful to Orbit and to the awesome Nazia for an advance copy of Arm of the Sphinx.

So. That tricky second book, eh? Following the acclaim for Senlin Ascends (my review here) Orbit have published the successor volume quickly, although we'll have to wait till December for The Hod King. So how good is it as a followup?

Indeed, how do you followup the central premise of that book - that the Tower, beacon of civilisation, the Lighthouse of the world, is really just a squalid mess of competing statelets, bleeding tourists dry and making them into hods - hopeless slaves doomed to port cargo up secret stairways in the Tower? (Not only a wicked thing to do - but pointless: as we know or son learn, the world in which the Tower stands has railways, airships, lifts, electricity and indeed, still more advanced technologies).

Bancroft therefore gave himself a tough task. My judgement is that he succeeds in making Arm of the Sphinx as compelling a book as Senlin Ascends. There isn't anything to quite match the creeping realisation of the truth about the Tower, rather, after we see a bit more of it - the Silk Reef is another fantastically drawn level - Senlin - or should I say Captain Tom Mudd? - and his crew are forced to seek refuge for their ship while carrying on repairs and are therefore "ashore" for much of this novel.

That doesn't mean that nothing happens, but the book isn't (after the opening section) the swashbuckling story of derring-do that Senlin's life seemed to be turning into at the end of the last book. Rather, it becomes a quite taut, psychological study of the different cremates as they kick their heels in a most strange part of the tower, and are tested in various ways (not least, in their faith in Senlin).

Through that testing, we learn - perhaps - more about the true nature and purpose of the Tower itself (this, if anything, is the counterpart to the horror in the first book at what it has become: something of a redemption, or at least, a possible redemption. But what we learn is from a very unreliable source who is, as becomes clear, pursuing their own agenda and keeping secrets from the crew - even while encouraging them to share their own secrets. That sharing isn't altogether a bad thing (certainly it means that Tom himself reaches a better place) but the overall setup is worrying. Having escaped Finn Goll, are the crew now just pawns of someone else?

So, this book gives the reader plenty to reflect on and sets up some dramatic confrontations in The Hod King. There's a well-drawn, three-dimensional roster of characters with Senlin, in particular, having moved on from the self-obsessed, heedless tourist of the earlier book to a resourceful and capable protagonist. And the team are now being drawn into wider - and older - mysteries. Arm of the Sphinx is a worthy sequel to Senlin Ascends and is neither just "more of the same" nor simply marking time to the next book.

But, oh, WHY do we now have to wait so long for the next book?