Excerpt and Review - The Folded Land by Tim Lebbon

I'm grateful to Lydia at Titan for an advance copy of The Folded Land and for inviting me to take part in the tour.

I have an exclusive excerpt from The Folded Land. I've reviewed the book below, but first, just take a look at this!

She nodded. It felt strange. Like coming home to a place so safe and familiar, and returning somewhere after a long time away. The familiarity held a deep nostalgia that someone her age should hardly recognize. “You’ve got an old head on your shoulders,” her mom used to say, and Sammi sometimes imagined herself with gray hair and strange, knowing eyes.

“I’m just going out on the dock for a little bit,” she said. “It’s a nice day, and some sun will make me feel better.”

“You’re sure?” That look of uncertainty. He asked her questions like that a lot nowadays. You’re sure? Do you really think so? Are you certain you want to do that? It had something to do with grief and the uncertainties he felt about her mother dying. In some ways he was being overprotective, making sure that every action Sammi took was a safe one. It was as if he couldn’t bear to have her to grieve on her own. They often spent time together, walking or sitting on the sofa and talking about Mom, looking through photos or old videos, crying and laughing and struggling to move on in their own individual ways.

But sometimes it became cloying.

Sometimes, Sammi just wanted to be on her own.

“I’m sure,” she said, smiling. “It’s one of those moments.” They both had moments that they talked about. Unremarkable memories of her mother, his wife, sitting somewhere and telling a joke, planting a rose bush, pointing at a flock of birds sheeting back and forth across the estuary. They might be years old, random recollections of lost times that meant so much. Every one of them was special.

“Right,” he said, smiling, nodding. “They’re important. Every moment is important.” He paused, and then added, “I’ll put the food in the oven to keep it warm.”

“You’ll lose.” He always said that, and until lately he’d been right. Last summer, though, Sammi started beating him in their races. She remembered her mother laughing as they’d both splashed and sweated their way past the spot where she sat in a boat, Sammi edging ahead by half a length and lifting her paddle skyward in triumph. She’d been so pleased that she hadn’t stopped mentioning it for the rest of the day. That long-ago, hot and perfect day.

While her father carried their early take-out to the house, Sammi crossed the lawn toward the dock. Though the sky was a searing blue and the midday sun beat down, the lawn was still damp from the previous day’s surprise downpour. Water soaked through her shoes and into her socks. It was a nice feeling, cool and calming. She stepped onto the dock and kicked off her shoes, pulled off the socks, and enjoyed the feeling of warm wood on the soles of her feet.
She walked to the end of the dock and felt as if she should continue onward. As if there was somewhere else to go. As if there was more to see. This was her favorite place in the whole wide world, but something inside seemed to be urging her elsewhere. Across the wide inlet she could see a dozen houses sitting close to the water, boats docked beside some, flags flying from poles, a few people just visible in gardens, heat haze making ghosts out of them. Several boats chugged up and down the river. A group of kayakers paddled past. She felt an unaccountable need to keep walking, because this wasn’t where she needed to be.

Sammi’s heart hammered in her chest, and as she turned to go back to the house a splinter slid into her skin just beneath her big toe.

Silly sausage! a voice said just over her shoulder, and she spun around. Her mother’s pet name for her, spoken in a voice so like her mother’s and yet with a weird lilt, like the distorted echo of someone impersonating her almost perfectly.

A shadow passed across the sun and she looked up. Clouds were forming, wispy, darkening. Her skin prickled all across her body. The hairs on her arm stood on end. She looked back toward the house. Her father stood outside the open patio door, smiling and waving her over so that they could share lunch. He and the house were a million miles away.

The Folded Land is the sequel to Lebbon's 2018 horror fantasy Relics, (my review here) in which Angela discovered that her boyfriend Vince was involved in a gruesome trade in "relics" - body parts of the Kin: monsters or mythical creatures from the ancient past, long before humanity ruled, whose heydey, the Time, is lost in the fog of myth.

Worse, she discovered that not all relics originated with the long dead...

Now, Angela is on the run, blamed by the police for the massacre that concluded Relics - and by the surviving relic hunters, for the loss of their friends and family. She has left London and is back in the US, trying to lie low, but the past - and the Kin - have other ideas.

This is an excellent follow-up to Relics, possibly actually better than the earlier book. There is a notable shift in tone, as Angela has to engage with what the existence of the Kin means for humanity. The Kin are bewitching, delightful, so rare and special that even meeting one is a privilege - but they are also inhuman, savage and powerful.

Many hark back to older times when they strode the land without fear.

Some aim for Ascent, revealing their power and taking back their usurped place in the world.

And in the space between those two ideas of the Kin - the rare and the precious, hunted almost to destruction by humans, and the powerful and deadly - sits this story. It's a tale sketched in shades of grey, with no moral absolutes. The Kin have suffered, we see them suffering, but they are also - or some of them are - ruthless and savage.  Lebbon is good at sketching the sheer otherness of his monsters, their non-humanity - even the most sympathetic. These aren't run of the mill urban fantasy creatures settling down to cosy, albeit weird, lives that echo those of humans. There's a real sense of rawness, of peril here, never more than when the story turns to the enigmatic fairy Grace, whom Angela rescued in Relics.

At the same time, and despite the many brutal deaths littering the book, Lebbon doesn't portray humans, either, as victims. The "kin-Killer", Gregor, strides through this book like the very worst of monsters, his goal obscure, his blade sharp and his tread ominous. He will cross paths with Angela, and the life of her niece, Sammi, will hang between them.

It's an excellent horror story, a superior fantasy, soaked in blood and haunted almost to the end by mystery. And best of all the story clearly isn't over, with The Edge still to come.

This series could have settled down into a bland life-among-the-monsters fantasy but in Lebbon's hands we're given something more, something older, deeper and much, much darker.

For more information about this book see the Titan website here. 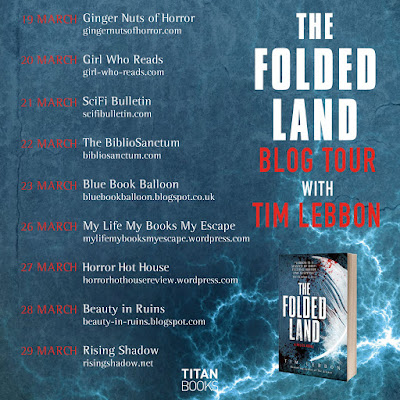