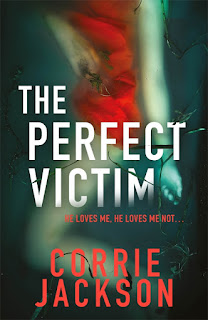 I'm honoured today to be joining the blogtour for The Perfect Victim by Corrie Jackson, which is out now from Zaffre - a book I know has caused a lot of excitement. Corrie's kindly set out some thoughts on How to write when life keeps getting in the way. Some of this would be useful advice in ANY endeavour, I'd say, not only in writing.

First, though, a little about the book.

For fans of Nicci French and Sophie Hannah, Corrie Jackson's explosive new novel will leave you questioning how far you would go for friendship.

Charlie and Emily Swift are the Instagram-perfect couple: gorgeous, successful and in love. But then Charlie is named as the prime suspect in a gruesome murder and Emily's world falls apart. Desperate for answers, she turns to Charlie's troubled best friend, London Herald journalist, Sophie Kent. Sophie knows police have the wrong man - she trusts Charlie with her life.

Then Charlie flees. Sophie puts her reputation on the line to clear his name. But as she's drawn deeper into Charlie and Emily's unravelling marriage, she realises that there is nothing perfect about the Swifts. As she begins to question Charlie's innocence, something happens that blows the investigation - and their friendship - apart.

Corrie Jackson has been a journalist for fifteen years. During that time she has worked at Harper's Bazaar, the Daily Mail, Grazia and Glamour.  Corrie now lives in Greenwich, Connecticut with her husband and two children. Breaking Dead, her debut novel, was the first in the journalist Sophie Kent series and was described by Glamour as 'Gripping . . .  crime with a side order of chic' and by the Sun as 'Original, amazingly written and tense'.

So, after that - over to Corrie!

Picture the scene: it’s a muggy August morning. I’m heavily pregnant and have just relocated back to the UK, after a two-year stint in Los Angeles. I’m tackling a pile of boxes, while simultaneously sorting my hospital bag, and yelling blue murder at my three-year-old son. Suddenly the phone rings. It’s my agent.

‘We have an offer,’ she says and, for a split-second, everything stops. My thriller, Breaking Dead, has found a home. ‘But the publisher wants a second book within a year.’

My ecstasy dissolves into panic. I’m giving birth next month. I still haven’t unpacked. It’s impossible. Ludicrous. But, even as the baby jabs me in the ribs, and my son topples off his cardboard tower, I know deep down I’m going to try. Because it’s a book deal, and I might only get one shot.

Fast-forward a month: baby Evelyn arrives and our world turns pink. With one eye on my newborn, the other on my deadline, I dive into book two. I spread myself thin. I play the role of mum, wife, writer; not winning at any of them, but doing the best I can. My husband is also working phenomenal hours and life is exhausting. Then – WAIT FOR IT - six months into this precarious reality (and for reasons too long to explain here) we make the tough-assed decision to move back to the US. I know, we’re masochists! Suddenly I’m juggling two tiny kids, a monumental writing deadline and another transatlantic move.

The reason I’m telling you all this? Because, spoiler: I survive! My kids don’t die! My husband doesn’t divorce me! In short, the book gets written. And yours will, too. Because, if you’re a writer, you write. No matter what. You don’t ditch your dream because the timing sucks. You learn to multitask. Hard. These tricks helped me through it. Apply them to your own life, and go at it.

Trust me, I’ve been a journalist for fifteen years and nothing sharpens the mind like the red-hot fear of a looming deadline. Don’t have a publisher breathing down your neck (yet)? Set your own deadline. Make it realistic; you’re not trying to break a record (or your spirit). It could be three hundred words a day. A chapter a week. Hell, we could be talking three sentences. The point is: set a deadline and STICK TO IT. The sense of achievement will power you onto the next deadline. And the next. Until, bingo: a novel.

So, the day job’s a bugger and the kids suck up your spare time? Get creative. Just because you can’t get to your computer, doesn’t mean you can’t write. I sketched out scenes in my head while breastfeeding. I road-tested dialogue aloud on the school run. Even bleary-eyed outings to cafes with the baby were opportunities to observe the people around me; noting down mannerisms that later made it into the book. I guarantee, the more you think about your book, the easier it is to pick up where you left off. Make sure you know exactly what you’re going to tackle before your bum hits the chair. Which brings me to my next point…

You’ve brainstormed your next chapter in the Tesco queue, and finally got twenty minutes to spare? Don’t waste it staring at a blank page. I follow the ‘nifty 350 rule’. When you first sit down to write, bash out 350 words without stopping. Some days it’s drivel, other days it’s dynamite. The point is: it forces you to write, and that’s half the battle. Your writing muscle is just like any other. Train it. You’ll be amazed how your brain starts to respond to quick bursts. And remember this: a fairly good chapter on paper is better than a perfect chapter in your head. As we (very classy) journalists say: polish that turd later.

This is the most important step of all. If you don’t give yourself permission, you’ll never get out of the starter blocks. You can be a good parent/spouse/friend/employee and be selfish, so dump the guilt. Go on, DUMP IT. The world won’t end if you carve out twenty minutes a day for yourself. It just won’t. I know what you’re thinking: maybe I’ll wait until things calm down a bit. But what if they don’t? Or what if they do and you’re no longer inspired? Seize the moment, my friends. Postpone the laundry (why else did the universe invent Febreze?). Plonk your kids in front of the TV for thirty minutes (contrary to modern thinking it won’t kill them). But make a pact with yourself. That small break in the chaos is for you, and you alone. Don’t waste it paying bills or ticking off your to-do list. Good luck!

Thank you, Corrie - best wishes for the book, I hope it finds lots of readers (and presumably, based on what you've explained above, you're already deep into the next one).

You can find The Perfect Victim in all the usual places: at your friendly local bookshop, including via Hive, or here or here if you prefer.

There are more great stops coming up on the tour - collect them all - just look at the poster for details. 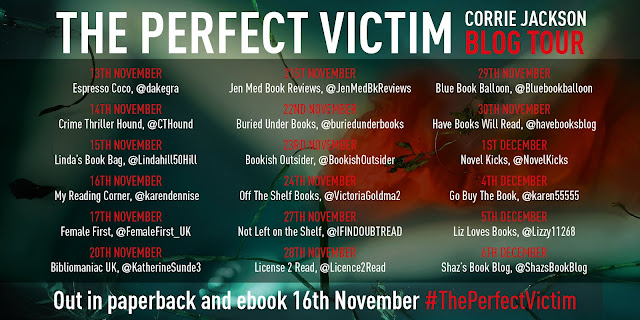