This has been a hard book to review. I find this is surprisingly often of true the very best books, say the ones you'd give six out of five stars to if you could. The main reason is that while not a short book, it's very compact, the very least it needs to be to reshape the reader's mind and make something new. So it's impossible to distil it any further and present the essence.

Nevertheless, I want to persuade you to go and get this book and to read it next, before the heap of other books you doubtless have waiting. So here goes.

Gnomon is unusual.  It reminds me at times of Douglas Hofstadter's Godel, Escher, Bach, at other times of Umberto Eco. The structure encapsulates the subject, is recursive and ramified; it is preoccupied, I think, by what is real - which is explored by setting up alternate viewpoints that the reader can only accept if some of them aren't, at some level, real.

Starting with the death of a suspect in custody in a near future UK (after 2040, but it's not clear exactly when) the story follows the investigation of Diana Hunter's life and death during her final interrogation by Inspector The Witness. - an AI supported nightmare of future surveillance policing - all for our own good, you understand.

Hunter was, it seems, a dissident, living off-grid, her home Faraday-caged, her past mysteriously firewalled. As Inspector Neith is drawn deeper into trying to understand her, one question dominates: what did Hunter think she could achieve, resisting interrogation, retreating further and further into her own mind? What was she running from? What was she running towards?

The book makes use of several loosely related sub-narratives, revealed as characters in Hunter's interrogation. Living, experiencing the records of that interrogation, Neith discovers these layers of stories. Are they stories true, within the structure of the book? Do they encode deeper information? Are the subjects real (and at what level?)

The stories begin as fairly self-contained with their own themes and concerns. Then resonances and connections appear. The separate tales begin to outgrow their framing. While there is an explanation within the context of the continuing narrative, rooted in Hunter's mysterious aims, the stories evolve and their protagonists become something more, acquiring deeper purposes and doing things that echo in the (that is, Neith's) 'real' world. But they don't, didn't, exist in that world, as her enquiries show. Just how powerful was Hunter's ability to fox The System? is she foxing us, too? (Almost certainly).

At the centre of the book is a concern with all that data. The System is benign, we are told. It is there for us. Democratic checks and balances are included so that the technology serves us, not the other way round. Yet the result is sinister, Harkaway brilliantly hinting at the doubts that even a loyal and successful member of society like Neith might hold, at the shadows behind the reality. 'All this technology flowed in its earliest days from America. With it came the political and social assumptions of a small number of engineers and entrepreneurs, predominantly male and white...'

There's beautiful writing here ('a lonely detective pursuing or fleeing a killer along a film noir alleyway whose shadows were cast not by dressed net-gothic stone but by the steel and glass of tomorrow's Skid Row'). There's humour ('Here I am, a Greek in a sack, in the back of a truck... It does slightly seem as if it might be a very violent Dr Suess book...')


And there are secrets.  Perhaps the key is a throwaway comment that something is 'like reading a book where all the stories are jumbled up and there's just a line of numbers at the beginning to tell you where to start'.

The stories in this book are jumbled up.

There is a line of numbers at the start...

A fuller review will be published in Shiny New Books later in November - but I didn't want to let publication pass without some thoughts on this remarkable book. 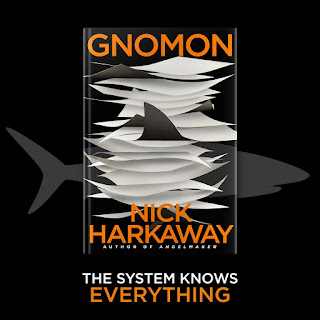