Review - Artefacts and Other Stories by Rebecca Burns 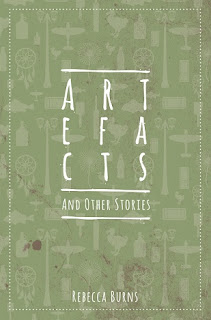 I'm grateful to the author for a review e-copy of this book.

Having previously enjoyed Burns' collection The Settling Earth I was keen to read more of her stories and wasn't disappointed. The seventeen here are all, in their different ways, treats. There are stories that find hope in bleak times; stories that leap time, joining moments across the decades through the recollection of a dandelion, a display of hats in a museum, or the gathering of a family after a death.

Many of them come at their point sideways - or, perhaps, they approach it from the margins, from the kitchen, typically, not the front hall. We often get a view from below of history - especially of war, and in particular of the First World War. A soldier home from France mourning the loss of his best mate with whom he shared a death and coat. A last cricket match, the boys taking it slowly, making the afternoon last, before marching off to war.

In keeping with that sidelong viewpoint, Burns often uses food to show what a character is like, where they stand in relation to others. Essential yet often neglected, the meals eaten or a lack of food to eat illuminate lives here.

The first story, The Dandelion, reminded me with something of a shock how controversial the building of the Channel Tunnel once was. We're back in the 80s, pre Tunnel. Monica is travelling to France with her daughter Rachel who's going to study French at a language college. Monica is against the idea and at first seems something of a fusspot, but it's not till the journey stirs painful memories that we understand why - and begin to sympathise with her.

The Last Game, August 1914 has an elegiac qualty, one of a number which examine the impact of the Great War, one hundred years on. It's no less powerful for the fact the War itself is never directly mentioned. Sport as a metaphor for war - and, in England, cricket as a metaphor for life, especially stiff-backed, English imperial life - is a recurring image in fiction from England but Burns does something remarkable and different here, turning the idea inside out. The cricket game being played is at once a rehearsal for the imminent conflict and a means of deferring it. Could we, her characters seem to feel, remain here, now, poised forever in this perfect moment, on the eve of the great catastrophe?

The Bread Princess similarly looks at a series of moments in successive generations in the life of a colliery town through the eyes of the young women chosen to distribute loaves to the poor (they're commemorated in their ceremonial bonnets, displayed in that museum). We see the changing life of the community, families rising and falling, hopes for the future dashed, we see injury, disease and death. From the bits and scraps of stories we can infer the whole sweep of nearly a century in the town. Here we're not trying to remain in a single moment but experiencing history as dynamic, forward moving and vibrant.

Walter Bidelow's Egg sets a change of mood. Rather comic in tone, it chronicles rotund Professor Julian Cramp's attempts to lay hands on a precious dodo egg from what he sees as an obscure Colonial museum. Meanwhile, his wife grows frustrated and his daughter dabbles with Suffragism. Cramp's stomach complains and his weighty breakfasts and dinners act as a fine metaphor here for his (Imperial?) acquisitiveness. But why is this fifty-two year old professor so obsessed with a bird that was notoriously stupid and prone to gluttony?

The Greatcoat returns to the theme of the Great War. A discharged soldier cherishes the coat that sheltered him and his mate on the battlefield (he's supposed to hand it back in within two weeks). A gentle story, teasing out the impact on Jack of four years of war, this is all the more powerful for being low key, understated.

Spark is in the minority here for being set in the present day. Wanda awaits her husband, Ray's, coming come to their house in Alaska. She suspects infidelity. One of several stories that feature women who want, but can't have, children ("the house was a womb of wadded calm") this story also explores a moment in Wanda's life: one where everything seems on hold, waiting, perhaps for a great change - we never find out.

The Waiting Room is another Great War themed story. Here the protagonists - an artist and her brother - have escaped direct consequences, but the preoccupation is still with death and loss, almost more dreadful for being indirect, not a matter of shells and gas but of some more creeping doom. Again, history from the sidelines.

I enjoyed the titular story in this collection, Artefacts, the most of all. Set in 1940, this is the only one with a hint of the supernatural. It revolves around Leah - "the woman in the registry office" - who has a secret ability to "see" things about people by touching their possessions. Following her and a colleague, Patrick, on a date at the cinema, we learn a great deal about Leah and her life with her grandmother. Good on the details, the daily inconveniences, of life in the Blitz, this story is perfectly paced and, I thought, deeply moving. I wanted to know what came next!

In Mayflies of Apollo, Burns agains uses the present day - so many of these stories are historical that those that don't need to delicately imagine the feelings and routines of a century ago almost seem strange, almost seem alien. Daphne hears on TV about a giant swarm of mayflies nearby on lake Erie and, on a whim, goes off to see them. The story works by frustrating the reader, by avoiding what one might expect - some epiphany brought on by the wonders of Nature - when Daphne is unimpressed and leaves in a hurry to take in a new vodka vapour bar.

An Old Man Walks up a Road shows the dangers of keeping family secrets for too long. Families change, it seems to be saying, secrets that might safely be kept at one time grow stale and things need to be shared, and until you're ready to that, relationships will go sour.

Lamb's Lettuce returns to the aftermath of the Great War. Adrian is back in his childhood home. Everything is the same - except that people are older - but nothing is the same. His father's stuffed animals evoke the horrors of war. "The hawk's eyes were black, like drops of ink. No brightness to them at all. And this is how it really is, he thought, remembering figures prone in mud."

In Tide we see a boy and a girl separated by a bridge - more a symbolic than actual barrier but it seems as though they will never be together. As in several of the other stories, there is a moment of choice, a moment of potential change but it's not clear whether it will come to something or just wither.

On This Day shows the dangers of being too drawn into memory, into commemoration. Richard Brakeman sees the past through the events described in one of those "On This Day" books. Starting by recapitulating the start of a Great War attack, he jumps through  variety of personas in an almost Walter Mitty way. But never on a Sunday. In the meantime his life in the here and now, the present, seems to dissolve.

In Cleaning the Gite a woman tends the holiday cottage that she lets out. Why does a baby's bootie, left by a mother who's otherwise been meticulous in clearing up before leaving, move her so? A sort of counterpoint to Spark, this isn a story about a woman who's lost (well, kicked out) her husband, a story of where Wanda may be several years down the line. There almost seems an affinity though between those characters.

Defibrillate gives us a surgeon suspended after an operation goes wrong contemplates her life in a a remote cottage in Scotland. Rather than food metaphors we have the commentary from the surgery to counterpoint her reacquaintance with a figure form her past.

The final story, A Gathering of Relics, features a big, ramified family (the relics of the title). Three generations of women (sisters, aunts, nieces) are gathered for a funeral. (No men - "menfolk always die early") Change may be in the air - Ruth hopes for forgiveness (from who? For what?) Again the story has a sideways feel. A lot is implied, a lot has been going on that no-one wants to state directly: Veronica knows this and uses tricks to bring some of it out in the open. Hovering over all is loss, and secrets and, as with An Old Man Walks up a Road, there is a question about whether those secrets should remain that way, or not.

Overall this is a strong collection of stories. They're all excellent taken separately but the themes that thread their way from one to another - or perhaps, I might say, season them, like a series of dishes prepared in the same kitchen - mean there's a unity and clarity here. Something is being worked out, something about what's missing from lives and how time plays tricks on us all. And Artefacts is well chosen as the title since in that story perhaps we come closest to what Burns is doing here - it's as though she is, like Leah, putting out her hand and touching something significant, seeing the whole in the part - and sharing that insight with the reader,