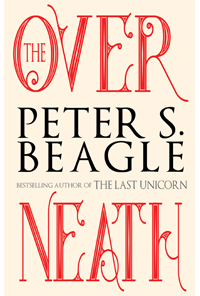 The Overneath is a kind of non-Euclidian, extradimensional connectedness linking certain special places in our world via a ramified set of routes through another - provided you make the right moves. It's discovered by Avram in the story The Way It Works Out And All which is part of this collection and it might function as a useful metaphor for the book. Overneath. "The sub-basement of reality-all those pipes far down under pipes, tunnels beyond tunnels, vast valves and connections, profound couplings and joints and elbows."

Like the imaginary Overneath, this collection joins things up - it will take you to unexpected places. Here be unicorns, and fantasy worlds (well, you might expect that) but also fairytales, urban fantasy, steampunk (of a sort), ghost and horror stories - and a great deal beside.

I'm ashamed to say that I hadn't previously read Beagle but, on the evidence of this book, there is a great range and variety of his work to explore.

There are thirteen stories here, including The Way It Works Out And All. Each is briefly introduced by Beagle. Thus, for example, he informs the reader who hasn't yet encountered Schmendrick the Magician, one of Beagle's most popular characters, of his place in the wider canon before, in The Green-Eyed Boy, we read his "origin story". Schmendrick is apprenticed at an early age to a magician who takes him on almost, it seems, to prove his father wrong to dismiss him. It seems to be a rocky start to an illustrious career, with many mistakes. Part comedic, part fond, the story looks at a boy on the cusp of growing up, and at what that might mean when he has powerful, if ill-controlled, magical abilities.

Then, in Schmendrick Alone, we see the first adventure, in which he confronts an arrogant lord ("His voice had the sound of boot heels in it") and eventually summons something unpleasant that he can't control. Schmendrick isn't the first young and inexperienced wizard to have done this (I thought of Sparrowhawk in Le Guin's A Wizard of Earthsea), but Beagle's story really captures the reader's attention and shows us why he did what he did (it involves a girl, of course).

The Story of Kao Yu is the first in this book that reflects a recurring theme of unicorns. Set in China - or in a Chinese fantasy mileu - it features a rigidly honest judge who travels the country trying cases and comes up against something he never expected to, something even the unicorn that sometimes shows up in the courtroom to help him out may have trouble with. My Son Heydari and the Karkadann is another unicorn story. The karkadann is a destructive, implacable Near Eastern variant of the creature, modelled on the rhinoceros but is sadly dying out at the time the story is narrated. This is a fact the narrator rather rejoices over, since one karkadann in particular has caused trouble for him and his son - but we feel that it may actually have led the boy to something better.

The Queen Who Could Not Walk is very much a fairy story, with a curse and a quest, love, loyalty, revenge and consequences. Featuring the oft used trope of a king and queen who lose their royal privileges, it shows have true love may still endure.

In a brisk change of mood, Trinity County, CA: You'll Want to Come Again and We'll be Glad to See You reads to me as urban fantasy (although Beagle doesn't use the phrase). I loved this story which examines what might happen if dragons were real, and common, in our world. Who would deal with them and how? Under-funded and hard pressed, it focuses on the D patrol, who police the backwoods of California. At the same time realistic and fantastic, it is very convincing and fun.

Also set in the modern world - but in, perhaps, an SF vein - Kaskia is a strange, haunting story in which a supermarket manager acquires a miraculous laptop. We'll all recognise his nervousness at invoking a feature we don't understand or can't control ("There were keys he carefully avoided touching, software settings he never once changed... areas of the screen where he never let the mouse wander...") but in this case the consequences go far beyond lost data or unfriendly account settings, they place Martin in contact with something that draws him in...

Great-Grandmother in the Cellar is, I think, more of a horror story, if an amusing one, and set in one of Beagle's fantasy worlds. A solid merchant family is confronted by a (one suspects) slightly deranged witch-boy who wants his way with the daughter. Father's away - how will they defend themselves, what resources might have to be called upon, and what will the price be? Creepy, funny, convincing, this was my favourite story in the collection. While not sequential I'd pair it  with The Very Nasty Aquarium which I think is firmly a horror or ghost story and reminded me of M R James classics such "The Haunted Doll's House" or "The Mezzotint". When Mrs Lopsided purchases a pirate figure to place in her new aquarium, she's struck by how keen the shopkeeper seems to be to get rid of it. Maybe she should have paid more attention, as it begins to transform her fish tank into something darker. This story is notable for introducing the redoubtable Mrs Bascomb ("She had taught junior high school English, and feared nothing") who steps in to help.

With Underbridge we return to the fairy story, perhaps, yet in a modern world. A variant on the troll legend, this is the story of a jobbing academic and his obsession with a very unusual troll. Notable for pairing Richardson's gradual slide into despair of ever getting a safe university position with his growing obsession and loss of restraint this story grounds a horrifying and creepy narrative in a modern setting.

Music, When Soft Voices Die is a strange story. Beagle confesses in the introduction that he's got no background in steampunk (a point he then illustrates perfectly by mentioning William Gibson - confusing "cyber" and "steam"?) yet this was an attempt at such a story. Thankfully he eschewed brass goggles and airships and instead produced a rather effective alt-Victorian tale (I think that is the essence of steampunk?) set after a UK-Turkish war which went badly for Britain ("Ramadan came early that year"). Four slightly Bohemian young men occupy a flat in Bloomsbury, where one of them embarks upon a series of experiments. Again almost a ghost story, I felt that this skilfully blended its Western and Turkish themes, as well as - without labouring the point - exposing the casual racism beneath the surface of the Imperial power.

The final story, Olmert Dapper's Day, stands out slightly as it is, while still fantastical, a historical tale, set mainly in New England and based on an actual recorded sighting of a unicorn by Dr Olfert Dapper in 1673. How cool is that? We want to know, however, who Dapper was, how he came to be in Maine, what became of him - and how he met a unicorn. Beagle sets out to answer these questions in what is a beautiful little tale.

Altogether an exceptional collection, a beautiful introduction, as I've said, to Beagle's writing.

One note of warning. The Overneath may be a convenient way to travel, but it doesn't always get you exactly where you expect, and you may find yourself attracting attention from what dwells there. venture in, and eyes will be one you. You may not be the same when you come out.