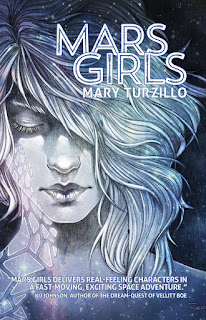 I'm grateful to the publisher for an advance e-copy of this book.

Nanoannie is bored. She wants to go to clubs, wear the latest Earth fashions, and dance with nuke guys. But her life is not exciting. She lives on her family’s Pharm with her parents, little sister, and a holo-cat named Fuzzbutt. The closest she gets to clubs are on the Marsnet. And her parents are pressuring her to sign her contract over to Utopia Limited Corp before she’s even had a chance to live a little. When Kapera—a friend from online school—shows up at her Pharm asking for help, Nanoannie is quick to jump in the rover and take off. Finally an adventure!

What Nanoannie and Kapera find at the Smythe’s Pharm is more than the girls bargained for. The hab has been trashed and there are dead bodies buried in the backyard! If that wasn’t bad enough, the girls crash the rover and Kapera gets kidnapped by Facers who claim her parents are murderers! Between Renegade Nuns, Facers, and corp geeks, Nanoannie and Kapera don’t know who to trust or where to go. Kapera only wants to find her parents so they can get to Earth Orbitals and she can be treated for her leukemia. Nanoannie wants to help her friend and experience a little bit of Mars before selling her contract to the first corp that offers to buy it.

Life isn’t easy when you’re just as a couple of Mars Girls.

This book was a treat from start to finish. A fast-paced, adventure in the hard SF mould, it's pretty relentless action from the very beginning.

The two Mars Girls - Nanoannie Centime and Kapera Smythe - are a force to be reckoned with. Plunged into a world of corporate plots, deranged religionists and the unforgiving Martian terrain, their lives are in danger again and again (even leaving aside the fact that Kapera is seriously ill and needs to get to Earth for treatment). They don't even know each other that well to begin with but are forced to rely upon one another for survival.

It's certainly not clear who else they might rely on. Kapera's parents have vanished (murdered? fled?) and Nanoannie's just want her home for supper - and to stop associating with that awful Smythe girl. (Nanoannie's no stranger to trouble, having got mixed up with some dodgy types over Marsnet). The two meet a succession of ever more dodgy corpgeeks, missionaries, would-be husbands and Facers (they really have little animated faces stuck to their own faces) and discover, slowly, that they can only really trust each other. The growth of their relationship is a joy to see and in fact is a greater focus of the book than the plot itself (at the heart of which is, though, a mystery which is satisfactorily resolved by the end of the book).

Turzillo has clearly had fun inventing her own teen Mars-girl language. Good things are 'nuke'. Nanoannie, despite still more than half believing in the sand vampires from Nausica Azrael vids, is conscious of the impression her "tanks" make on the boys and wants "to dance to trendy music, try out exotic hallucinogens, buy slinky rags design on Luna". She also wants to be a commercial pilot, maybe head her own rescue agency - and get to meet Kapera's dreamy brother, Sekou (to whom Kapera's bits of the narrative are addressed, as a diary: Kapera's a bit evasive about Sekou: exactly why, we will eventually learn.)

It wouldn't do though to see life on Mars as fun, fun, fun. Danger is everywhere. Never touch the ground with anything other than your (insulated) boot. Exposure to the (lack of) atmosphere causes 'skytouch' which can lead to serious injuries. Diseases such as leaukemia, caused by the relentless cosmic ray exposure, are common. Adelaide Krintx, from Nanoannie's school, 'died in an explosive decompression accident at her parents' Pharm'.  Death is everywhere, and even if friends are not supposed to die, it seems distinctly on the cards that they will.

In short, Turzillo is as good at making the girls and their lives seem real as she is at conjuring up the deadly beauty of Mars, or the orbital physics of the Up and Down 'escalators"' (to and from Earth) or the tormented yet apparently harmless belief systems of those who worship the Face on Mars. She's note perfect in catching the dichotomy between the rebellious teenager, who has important stuff going on, and the soothing parents who want her safe where they see here, and signed up to that corporate contract.

This is above all a very readable book, written in a deceptively simple style: language which seems on the surface slightly naive - 'bodacious tricknology!', 'I'm not saying I'm the nukest chick on the planet' - but which then suddenly grabs you by the throat:

"What could be better than boyfriends and money?"

Let Nanoannie and Kapera show you around their world - but be careful to keep your suit intact, and watch out for those sand vampires...