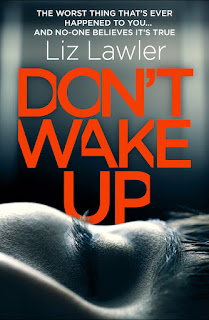 Today, I'm honoured to be joining the Don't Wake Up blogtour, host some Q&A with author Liz Lawler.

Alex Taylor wakes up tied to an operating table.

The man who stands over her isn't a doctor.

The offer he makes her is utterly unspeakable.

But when Alex re-awakens, she's unharmed - and no one believes her horrifying story. Ostracised by her colleagues, her family and her partner, she begins to wonder if she really is losing her mind.

And then she meets the next victim.

So compulsive you can't stop reading.

So chilling you won't stop talking about it.

A suspenseful and gripping start to a book, I think - so I wanted to hear a bit more about Liz and how she writes.

BBB: Did the character of Alex come to you before the plot or did the plot come to you first and suggest her?

LL: The plot came first, but Alex’s presence was always there from the beginning. She was simply waiting to be named. I tried calling her other names, but she didn’t answer until I called her by her name, Alex.

BBB: How much control do you have over your characters? Did the book ever take completely unexpected turns?

LL: I think I only have control of my characters until I try and get them to do or say something that doesn’t suit them. I kind of know it immediately if I try and force them into a situation that they’re unhappy with, and until I rewrite what they want to do or say, they go silent and moody.
In answer to the second part of the question, yes, the book did suddenly take an unexpected turn. I found at one point I had this character that kept appearing, trying to muscle into the story; a really interesting old man who kept following Alex and I really enjoyed meeting him, until I realised that this wasn’t the story he was meant to be in. He has his own story to tell at another time.

BBB: Your book opens with a brilliant premise – right in the middle of things, then carries on at breakneck speed. Was it always going to be that way or did it take time to get it right?

LL: Well firstly, thank you for that lovely praise! When I wrote the first draft of this book I felt as if I had run a marathon in the character form of Speedy Gonzales, desperate to get to the finish line to know the ending. There was no let-up day or night as I ran with the story and then when I got to the end I had to return to the very beginning and run the same route again, only much slower. I think in the final drafts I was crawling through it, a bit like in a search and rescue mission, looking for anything hidden or dropped along the way. But I must confess, I always do things at breakneck speed. It’s a wonder that I’m still standing. As a child I was frequently called Dizzy Lizzy.

BBB: The book’s being called a psychological thriller – would you agree? Would you place it somewhere else? Or are these all just labels?

LL: I’ll only agree if the readers agree. But I am pleased that it’s been placed in this genre. I do think genre labels direct the reader in the direction they want so that when they see the word crime, thriller, romance, they know what they’re getting; that what’s on the label is what’s inside the cover.

BBB: What inspired you to write in the first place – and how did you get started with your writing career?

LL: The simple and most truthful answer would be life. What we see, hear, experience affects each of us differently. We can all look at the same thing, but not see it in the same way. I am always imagining scenarios that take me away from reality, sometimes to a kinder world, very often to a sunny beach with delicious cocktails at hand, but more often it is to a dark place where I then have to search for a light, a way out. Writing allows me to find the light if I want to. Or else – I’m just a complete fruit loop.

Writing started for me very unexpectedly, on a morning after I’d just dropped the kids off to school at the end of the summer holidays. It was never something that I imagined doing. Writing a letter or an essay would have emitted a groan from me. But on this day, almost compelled; I picked up a pen and began to write. Since that door opened, even when I try, I can’t shut it.

BBB: I know it’s early days, but how has it been so far – how does it compare with what you expected?

LL: Terrified. Exposed. Waiting for the axe to fall. Shocked that someone liked it. Shocked that someone loved it! Embarrassed that someone didn’t like it!! On the whole a bit of a rollercoaster, my least favourite thing to be on. A couple of weeks ago I went on a children’s rollercoaster; you were allowed on it if you were 1.1 metres, which is three foot seven inches. As the ride began I looked back at a very small boy, who had been refused entrance and was crying, desperate to get on it and wished I could change places with him. Then cutting through all my worries and fear I hear the voice of my darling mum, telling me to pack it in and be thankful that I didn’t get stopped from going on this ride – that there were many more willing and less afraid people wishing to take my seat.

BBB: And what comes next?

LL: Alone time again with just me and the characters inside my head waiting to tell this new story. They are waiting for me to put back on Speedy Gonzales’ sombrero to start the beginning of the race all over again. Hopefully I will tell their story strong and true.

BBB: Finally, a question that isn’t (directly) about the book. You’re trapped in a lonely mountain cave and the rescue party will take several days to reach you. You have plenty of food and water, and you can have one book with you. Which would it be?

LL: Firstly, it would have to be a very big book as I know how quickly I read a story. Secondly I would choose a book I haven’t read before. So without hesitation I pick War and Peace by Leo Tolstoy. So very many people in years gone by have strongly recommended that I read this book and I am ashamed to say that I still haven’t. So please show me to this cave in this lonely mountain. My bags are packed and I’m ready to go.

BBB: Liz, thanks for answering these questions, and best of luck with Don't Wake Up (and with your future projects!)

Don't Wake Up is available now, published 18 May by Bonnier Zaffre in e-book with the paperback coming in August. You can get the e-book here or pre-order the paperback here. 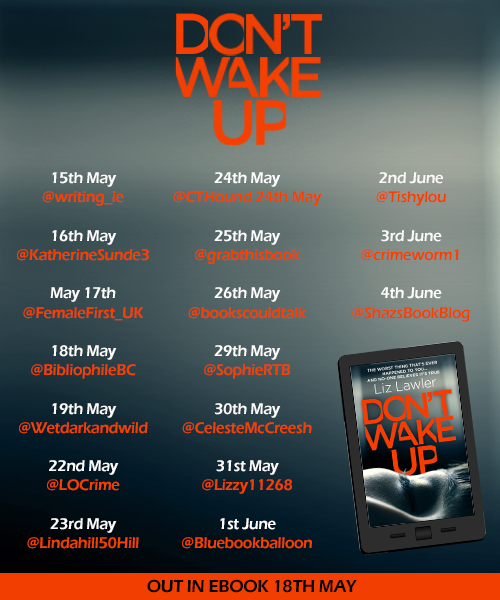