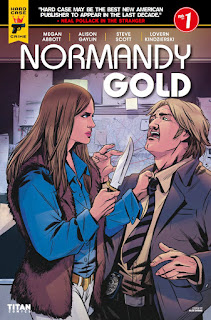 I think this is the first time I have reviewed a comic here - it's always great to cover new ground and so I'm very grateful to Titan Comics for sending me a preview of Normandy Gold.

When her younger sister is found at the centre of a brutal murder case, tough-as-nails Sheriff Normandy Gold is forced to dive headfirst into the seedy world of 1970s prostitution.

Written by bestselling crime fiction stalwarts Megan Abbott (You Will Know Me, Dare Me) and Alison Gaylin (What Remains Of Me, Into Darkness) with stunning artwork by Steve Scott (Batman, X-Men Forever, JLA).
Normandy Gold is at one level an old fashioned action adventure, badged with Titan's Hard Case Crime label. The content is at first sight very much in keeping with that slightly retro brown-nourish image: the crisp panels depict a 70s milieu where men are men and think women exist for their pleasure...

But the Normandy of the title is a tough cookie, a local sheriff who can handle herself - and a knife - AND her Life-on-Mars colleagues. So when she's challenged to leave her (relatively) safe place to search for her wayward sister, the reader suspects trouble ahead for anyone who gets in the way. 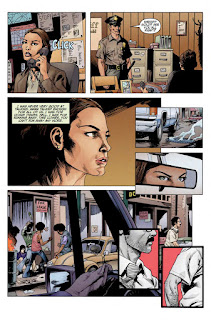 From the very start, Normandy dominates this story.

"They were going to call me Victory" she begins, recounting her birth during the Second World War - and the ruin brought on the family when her father is killed in the Normandy landings. 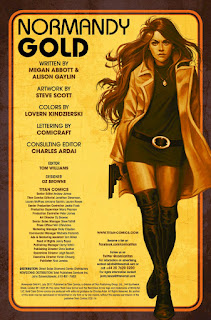 "She named me Normandy" the story continues. "There's no such thing as victory".

Yet despite that Normandy is, still fighting, still pursuing some sort of victory. In this first part we may be some way off from it, but Normandy makes it very clear she's prepared to go to any lengths - any - to achieve that.

I'll be interested to know where that leads her - with a Washington DC setting I'm guessing some political sleaze, conspiracies, and hopefully attempted coverups. But that's only my guess: I don't know any spoilers!

This is definitely an adult themed comic, with flesh on display and some brutal scenes - but with Normandy hunting down the truth I think it will amount to much more than that.
Email ThisBlogThis!Share to TwitterShare to FacebookShare to Pinterest
Labels: 1970s, adult, comics, crime, Hard case crime, noir, Titan comics