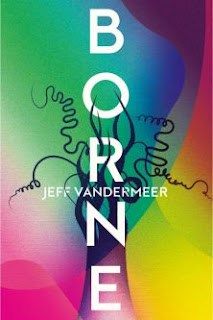 Is "biopunk" a thing?

If it wasn't already, I think we need to coin the term and annoint Jeff VanderMeer its high priest. What Gibson is to cyberpunk, VanderMeer is to the bio version. Spore shedding fungi, environmental catastrophe and mutating, tainting biothings and biotech are the hallmarks, with humans - ordinary, unmodified humans - basically so much feedstock in a world not so much kill or be killed as infect or be infected. Under this barrage we mutate, transcend and symbiose - and a terrible beauty is Borne.

That atmosphere was a hallmark of works such as Finch or the Southern Reach trilogy and it's here in spades again.

But there is more.

In Borne, VanderMeer delivers a true post-apocalyptic novel, with a tender love triangle at the centre: in the story of Rachel, Wick and Borne we see three damaged people - a woman, a man and a child who's also a monster - trying to stay alive in a very hardscrabble, decaying city somewhere (it's never clear where). And their history, and their future, seems to embody the tragedy of what's been done (is being done, will be done) to the planet, to us all.

Rachel and Wick are partners - partners in survival as well as lovers - living in the fortified Balcony Cliffs in the nameless city, scavenging what they can from ruins which are occupied by an ever shifting population of escaped biotech, starving humans, feral children and, most dangerous of all, the entities know as Mord, and as the Magician.

Mord is a huge, bioengineered bear, somehow gifted the ability to fly (I know that sounds just too fantastical, but VanderMeer effortlessly brings him to life and makes him plausible). The Magician is a human, a woman, somehow the rival of Mord for control of the city. Through their roving proxies they contest the ruins, with Rachel and Wick seeking to stay out of the fight.

Much of the struggle centres on the remains of the Company labs, origin of the biotech that has gone wild: curse and blessing, as it's also the only source of food and medicine. But the precise origin of the Company and its exact part in the "ruination" of the city and the world, is obscure and secret. Can we trust Rachel and Wick?  Can we trust Borne, a being that starts out houseplant size and even rather cute (or so Rachel thinks) but grows, as do all children...

That issue of trust is something VanderMeer returns to time and again and he cycles round the three: the secrets Rachel and Wick keep from one another, the betrayals of each other they commit (necessary betrayals, we are told), Rachel's feeling that she's let Borne down, his own secrets.

Trust. Mistrust. Betrayal. Secrets, lies, forgetting and remembering. It all seems so apposite for a story anchored in the maybe, a place which has eaten up its history and turned into a rubbish heap (I saw echoes here of Harrison's Viriconium).

This is a mind-gripping, stomach-turning read. VanderMeer documents so much.

The decay of a world - seen mainly through the eyes of Rachel, a refugee whose story has been one of flight from danger into danger, as the world wound down and broke (that strand of the story alone would be enough for a whole book by most writers).

The decay of a world - seen mainly through the eyes of Rachel, as the little domain of the Balcony Cliffs is unable to keep out the big, bad monsters.

The decay of a world - seen mainly through the eyes of Rachel, as the creature on which she lavished what could have been a mother's love grows into something untameable, wild, and scary (but also seductive and magnificent?)

We see those failures of trust in so many, many ways - not only the necessary betrayals but, eventually, the emergence of deep, dark secrets which underlie everything else.

To read this book is to come away tainted, in a sense: the words infect like spores, VanderMeer's biotech mutates the reader, preparing them for a shower of rain which will bring unearthly growth.

It's a deeply weird read - though not, I think, in the end one without hope - and for me, has to be the book of the summer.