Review - Bay of Martyrs by Tony Black and Matt Neal 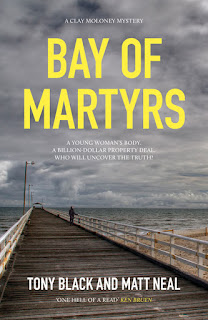 I was intrigued by both the setting of this book - Australia's South Coast - and its creators, comprising Tony Black, practitioner of Tartan Noir, and Australian author/ journalist Matt Neal. An unfamiliar setting is always a great beginning for a crime story, giving an excuse to look behind a well maintained facade and spot the areas of damp, of rot and decay... And what could be better than a pairing of a crime writer and journalist?

Set in the coastal town of Warrnambool, this is a story of drugs, misbehaviour, cover up and murder and of a journalist - Clay Moloney - who, reluctantly, lifts up a stone and finds something nasty underneath. At one level, it's predictable: the discovery of a body (young waitress Kerry Collins) on the beach at Bay of Martrys. The burned out hack assigned to the case. The obstructive police, and an air of things not being quite right. An editor applying pressure. Murky local politics.

At another it's fresh and distinctive - there is the dissonance of all this taking place under the clear Australian summer sun, not the dreich grey of a Glasgow or Edinburgh sky, and the outsider viewpoint provided by Moloney's new Irish colleague, photographer Bec, who's come to Warrnambool to - actually, that's never quite clear, only that she's been rattling around the world a bit too long and wants some stability. Where better than the picturesque South Coast?

The unlikely partnership are slowly drawn into solving a mystery, but only gradually, and with no idea what doing so will cost. Their quest draws on Moloney's roster of shady contacts: if the death at the heart of this story hadn't already spoiled any idea of an idyllic life by the sea, the cast list of drug dealers, sex workers and corrupt officials would do so pretty quickly. As would Moloney himself, whose drink and drug sessions only seem to become more uncontrolled as he gets nowhere in discovering how Kerry died.

This is where the noir element truly comes in - a bruised, unclean man who nevertheless has the insight and the drive to root out and expose evil. Moloney is a magnificently drawn example: not by any means a likeable man, not even one you might want to share an evening drinking with (not least because of how it might end) but in a curious way, an admirable one.

Black and Neal do give some backstory to explain his attitude and history but actually it doesn't really matter too much though I think it will provide themes for future stories . I do hope so, because now we have Moloney, I want to see him dig deeper among those golden sands and seedy backstreets...

Strongly recommended if you're into gritty crime, or like your fiction in new locations.