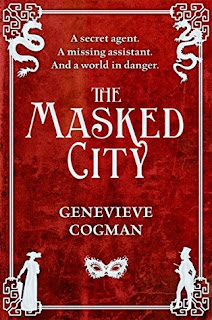 I'm grateful to the publisher for an advance copy of this through Netgalley.

This is the sequel to The Invisible Library (Amazon review here: I don't seem to have blogged this one) and is in my view as good or better than the earlier book.

Irene works for a mysterious, extradimensional Library which exists across multiple worlds. Is mission is to collect books and it isn't too fastidious about the means employed. Basically Irene and her colleagues are Library secret agents, equally at home demurely taking tea with the Ambassador and climbing over rooftops committing burglary.

In The Masked City, Irene's little establishment in a Victorian London (but with werewolves! And Fae!) suffers a reverse. With lots of promises form her bosses and the dragons, she's still left pretty much on her own, undertaking a perilous journey to put things right. Failure will mean was between the Fae and the Dragons; failure will mean Irene takes the blame.

Both Dragons and Fae are tricky customers: the former domineering and tyrannical, the latter prone to feeding on humans by drawing them into and an ever more megalomaniacal life narrative. Dragons thrive on Order, Fae on Chaos. The Library seeks to maintain a balance.

What follows is pretty much non stop action featuring an enchanted Venice, a supernatural Train, alternate dimensions, sinister cloaked figures in the mist, an impossibly handsome Dragon and a great deal more. Throughout it all Irene is intrepid, resourceful and independent. Nobody comes to her rescue (well I think it might have happened once) and the fate of that handsome Dragon depends on her. It's a kind of compelling nonsense (not a criticism, I LIKE nonsense) as beguiling as a Fae Lord and impossible to pigeonhole (PhDs could be written on whether this is Fantasy, Urband Fantasy or what. Who cares.)

One of my (slight) criticisms of the previous book was that in places the language could do with a bit more polish. That couldn't be said of Masked City and indeed Cogman has some witty turns of phrase ("Do I itch, and would they scratch?" "She, Vale and Kai were untidy blotches on its expensive elegance. Blotches with coffee, though, which helped.")

Mostly though it is, like Invisible Library, a great, occasionally funny, occasionally scary, romp. And Irene is a terrific hero. More of this please Ms Cogman.