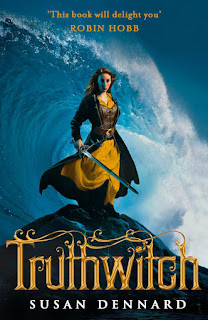 I was sent a copy of this book by Amazon UK to review as part of their Vine programme.

Reading it was something of a leap in the dark for me - this type of epic fantasy, not to say YA(ish) (which is how it seems to be presented - though I'm not 100% sure...) isn't what I usually go for. But I'd heard good things about the book (and series) and thought it worth a try - and I'm glad to say that I found it very entertaining, deftly written and engaging.

We first meet Iseult and Safi, the teenage (?) protagonists as they - literally - commit highway robbery on a remote coast road. They're quickly established as two very capable young women (indeed so much so that Dennard soon has to find ways to incapacitate, separate or otherwise hamper them, or else they'd make mincemeat of their enemies and the book would be done in half the length). Not only are they able and willing to kill (a bit chilling, that) but they have magical abilities - Safi is the Truthwitch of the title and can distinguish between truth and lies, Iseult can see (and manipulate?) people's "threads" - the coloured strands that reveal emotions, bind together lovers or friends and dictate one's way in life.

These aren't the only magical abilities in the book. We meet windwitches, tidewitches, firewitches and even blood- and iron- witches, to list only a few. There's also a supporting cast of emperors (and empresses), kings, princes, fighting monks, sailors and merchants. It's a vivid, jostling world, clearly modelled (there is a map! look at the map!) on medieval Europe, albeit one with REAL witches and REAL magic.

It's also a troubled world where an uneasy peace exists between rival empires. Where the poison of ancient wars taints the land. Where witches are hunted both by those who prize their powers and by those who fear and hate them. Dennard doesn't bother to explain much of this, rather we're plunged right in and have to pick it up as we go along, so the first 50 or 100 pages may be rather bewildering. Indeed I stopped trying to remember some of the detail - like which empire was which - and I was worried for a while, then realised it doesn't really matter. Dennard has you safe and takes you where you need to go, just as the wind-witchery catches up Safi and Iseult many times and sets them down again.

It's a fairly intricate plot involving kidnap, forced marriage and high politics (taking Safi and Iseult into a world they are less familiar with and where they are unable to solve their problems at swordpoint) but a big-hearted one. The two fearless girls are that heart. Amidst the breakneck action their friendship burns brightly and when they are together - and unhampered - it can burn through any obstacle.

There are of course some familiar fantasy tropes: a mysterious shadow in Iseult's dreams, a hint of some coming, prophesied hero or god, a warrior with a sworn duty, the high-born aristocrat and the humble, runaway tribe member striking up a friendship - but these don't distract and much of the action, at least in this book, is character driven and immediate: no doubt the bigger picture will be explored in the sequels. And even here Dennard plays with the ideas and overturns them - so for example that warrior would rather hire out his sword than fulfil his sworn destiny - and I'm sure that even when these elements assume more prominence they'll still be secondary to the joyous team that is Safi and Iseult.