Review: The Widow by Fiona Barton 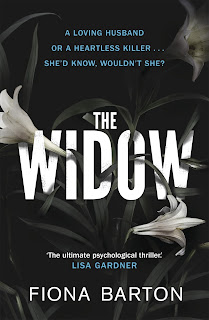 I'm grateful to the publisher for an advance proof copy of this book.

Jean Taylor's life was blissfully ordinary. Nice house, nice husband. Glen was all she;d ever wanted: her Prince Charming. But then everything changed...

The premise of the book is intriguing: it's the story of one of those women glimpsed standing by a scandal-wracked husband. "What's really going through her mind?" you wonder, before flicking over the channel or clicking to another page.  "Why doesn't she just leave him? Did she know?" Or even perhaps "If she's sticking by him maybe it's not actually true. She must know. You would, wouldn't you?"

Fiona Barton seems better placed than most to answer these questions, having worked as a journalist including covering high profile trials and heartrending cases. She carefully doesn't say how far the actual events portrayed here (rather than the details of how things are handled) are based on insider knowledge, though a few elements seem pretty familiar from the past few years.

I'm not sure though that in the end we exactly get an answer.  We examine Jean's - the wife/ widow's - motivation as we learn about her, about her husband and about their life beforehand (it wasn't as perfect as the blurb above suggests).  While at one level (what actually happened) there is, by the end, (apparently) no mystery, at another - motivation and inner life - there remains a deep puzzle about her. Perhaps that's inevitable, and perhaps it also shows how far Barton has created a real character who can't be pinned down with a neat resolution - even if it runs slightly counter to the marketing of the book.

In many respects this ought to be a rather depressing story - as any story centring on the disappearance of a child is likely to be (no spoilers, this is clear from the start) - especially one peopled by mostly unlikable characters (not a criticism: I'm not one of those who wails if I can't easily relate to someone in a book). Barton therefore has a formidable task, particularly I think as a first time novelist, to create something that will draw the reader in. It's a testament to the quality of her writing that she does this: the story has bags of narrative drive and the characters are real and believable even if they aren't, mostly, people you'd want to share a park bench with.

Barton splits her story between several points of view - mainly The Detective, Bob, and The Widow: also quite a bit of The Reporter, Kate (dare we hope that these parts are more personal? It's not really clear though the antics of the press aren't exactly portrayed as heroic) with one or two others. We also see quite a lot, through their eyes, of The Mother though she doesn't get the same direct focus. I think this would be pretty painful and I was rather glad of it, to be honest.

The narrative dodges back and forward in time, starting shortly after the disappearance of young Bella but also following the aftermath of the police investigation some years later. We see how the whole process has affected Glen, the main suspect, Jean, Bob, and Kate. Again that has the effect - a necessary one I think if a book like this is going to appeal widely - of distancing us from the ghastly reality of the main events, because we see everyone later when they have all, to a degree, "put it behind them" (as Glen is fond of saying: easy for him to say).

So the full picture only emerges slowly, as the case against Glen builds over years. One of the cleverest things that Barton does is to make us see the various characters form each other's point of view. With no omniscient narrator the reader is left wondering who (if anyone) they can trust in all this - sadly, I think, the answer is nobody, not even the grieving Mother with her campaign raising money to "Find Bella".

If all this analysis makes the book seem rather cold and calculated, it really isn't. As I said above I found it engaging.  It's a book with heart, a very satisfying read, if a sad one, and, yes, Barton does withhold some mystery to the end - while I didn't find it totally surprising I wouldn't have put money on the outcome.

On the evidence of this book, Barton can really write and I'd look forward to more from her in future.