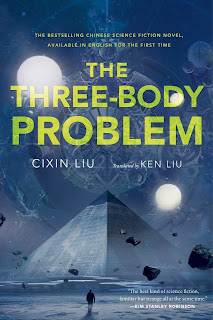 I bought my copy of this book from Waterstone's in Oxford

The three body problem, in classical physics, refers to the motion under gravity of three masses. Unlike for two bodies, where the relative position and velocity of the bodies can be found from a formula, for any time, with three bodies one can only determine the result numerically - by simulating the states - in general although it can be calculated exactly in some special cases.  Those numerical solutions aren't so bad: they enable us to get to the Moon and to launch probes to the edge of the Solar system. But they can't prove that - for example - the Solar system is stable, that it won't all fly apart at some stage.

This is the conundrum that underlies Cixin Liu's book. Set sometime in the near future - based on the technology - scientists and other leaders of thought are being enticed into an online game, "The Three Body Problem" apparently set on a word with three Suns. Trisolaris is plagued by frequent "Chaotic eras" during which the planet becomes unliveable, and its future seems bleak with no means to predict how long those periods of chaos will last. The game is unusually gripping and seems to attract like minded people to attack the central Problem.

Against this background, a researcher in nanomaterials, Wang Miao, is approached by the police in Beijing to help with an investigation into a mysterious organisation, the Frontiers of Science, which involves him becoming immersed in the game. One thing leads to another and Wang's investigation leads him cross paths with both to Shi Qiang, a hard bitten and chainsmoking Chinese policeman and Ye Wenjie, a retired astrophysicist whose father was murdered by Red Guards during the Cultural Revolution.

Much of this story is in fact Ye's, describing what happened to her next after she was sent to work on a highly classified research base deep in the forest. That turns out to have deep repercussions not only for China but for humanity, and I gather that Cixin Liu explores that further in the rest of this trilogy.

This is a remarkable book, a rattling good SF story which never lets up - whether told from the point of view of Wang, of Ye or even of the Trisolarans themselves - but which is also rooted in the reality of events in 60s and 70s China. These are things we have never I think understood well in the West - vast dislocations in a country we know very poorly (and much of what we do know is the open China that has emerged since those events, so at two removes, as it were) - so there is a real sense in which to me, the strangest things in the book aren't the SF themes but the human and cultural ones. That isn't of course the same perspective as that of the original Chinese readership, which illustrates perhaps the value of translation for books like this.

As unfamiliar as the content were aspects of the form. The book is, as I said, told from a number of perspectives and includes for example official documents and reports as well as statement, narrative and speeches. To a degree the story is a framework for presenting these, with some of the characters having a fairly clear purpose to present a particular outlook or perspective . I haven't read much other Chinese fiction but I recognised that approach (though I'm not going to generalise and assert it is the norm!)

This book has collected lots of praise and prizes - deservedly, in my opinion.