Review: Sorcerer to the Crown by Zen Cho 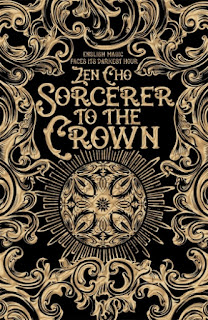 I bought my copy from Blackwell's in Oxford.

This is a book that's attracted a lot of interest, and in my opinion, rightly so.

It is the story of two outsiders - the Sorcerer of the title, the self-contained, somewhat shy Zacharias Wythe and the somewhat impetuous Prunella Gentleman, orphan and would-be magician.

With the Napoleonic wars at their height, Britain is not a society to welcome outsiders.

Zacharias is an outsider because he is an ex-slave and African, Prunella because, as a woman, she's not supposed to practice "proper" magic, the domain of the Society of Unnatural Philosophers (basically a nasty social club full of snobs and bigots). The tension between these two and the Society (and... Society) is what gives this book its drive and zest.

Zacharias thinks only of his duty - to a nation and a class that would rather he didn't exist (and the book reveals what that cost him) - and has a job to do: English magic is draining away, and he needs to find out why. Of course his opponents only see this as an excuse to be rid of him, and are prepared to resort to the most horrible means to do so. They do, though, seem to have latched on to a dark secret: what really happened to Zacharias' predecessor, who die in strange circumstances, and his fairt familiar, Leofric? Zacharias doesn't want to talk about is but unless he can find a plausible explanation his time as Sorcerer to the Crown may be ended in a most unpleasant way.

Prunella wants a husband, not because she's particularly romantically inclined, but simply to give her a place, an income so that she can survive in Society, there being few roles for a single woman in the complicated hierarchy of the ton. So despite being a talented magicienne she aims first for an introduction to the right circles - despite the feelings that she starts to develop for Zacharias.

In doing justice to her characters Cho shows a great sensitivity, especially, to language, giving all of them - from a flustered schoolmistress to a young buck about town to a pompous Government flunky - a convincing Regency voice. But she also wraps up the racial and gender aspects with a good dose of post Colonial home truths for a complacent age (the country's magical difficulties are not helped by an inept far eastern imperial adventures) and shows how fantasy, whether or not in an actual historical setting, only benefits from diverse characters and from engaging with identity and history.

I apologise if that last bit makes the book sound preachy. It's really not. Above all it is well written, the characters credible and well portrayed, the story pacey and convincing (and at times very funny, with moments of pseudo Wodehouse absurdity in a proto Drones Club as a young man tries to avoid his fearsome Aunt's orders to give a speech at a girls' school).

And the denouement is genuinely... shocking.  I'll just say that behind the Jane Austen-esque manners, Prunella has real steel in her soul and a streak of ruthlessness that left me gasping.

So, as I said above, I think this book is deserving of the praise and attention it has received. For once, this is a story that lives up to the hype.

Finally, and not least, the UK hardback is simply a beautifully designed object.