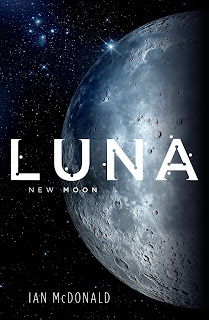 I saw this book when it first came out and nearly bought it it but just didn't quite, as with so many books - my TBR pile is really a health and safety nightmare, and I'm trying to train myself not to buy so much. Typical that I should overcompensate and I want to thank Kate who pressed this book on me and made sure I'd read it.

The blurb basically describes this as "The Godfather on the Moon" and I can see that - and that's a pretty good description for a mainstream audience. For SFF readers, I'd say: No, it's Dune for the 21st century - but done much better.

Dune is a book about conflict and rivalry between wealthy dynasties competing for power and resources on an inhospitable, sparsely populated planet. So is Luna. But while Dune, a book of the 60s, has an epic, Lawrence of Arabia sweep to it - all those battles on the desert sands of Arrakis - Luna equally fits the 2010s. Instead of the grand sweep of history we get a close up story as perceived through gossip sheets and blogs ("Three days to the wedding of the year! What will the boys wear? Here are spreads of Lucashino Corta's latest looks...") Much of the action is underground in confined, or at least limited, spaces - sweaty tunnels and artificial habitats deep beneath the surface, excursions to which are rare and fraught with danger.

Five "Dragons" control trade on the Moon, five families, the Cortas, the Mackenzies, the Vorontsovs, the Suns  and the Asamoahs. The rivalry between the Cortas and the Mackenzies is especially fierce and plays out in this book, seen through the eyes, mainly of Corta siblings and Marina Calzaghe, an emigrant to the Moon. (Another parallel with Dune - that sense of exile from a blue, wet world - in both Marina and in Adriana Corta, matriarch of her dynasty: she's the only first person narrator here, telling the story of how she came to the Moon, what she gave up and what she gained). The Moon is a harsh world, with many ways to kill. There is little law, only contracts negotiated on the fly between "familiars" - holographic AIs that company every character. Nothing is owned, all id on loan from the Lunar Development Corporation with air, water, carbon and data paid for by use. (If you run low on funds your breathing is restricted).

Earth is a distant memory for some, a legend for others. Live long enough on the Moon and your bones change, you can't return. Your body becomes the property of the LDC, to be turned into comps when you die. One character here, recently arrived from Earth, talks of being scared every moment of every day - and that fear pervades this book, even as the characters try different ways to block it: power games in the boardroom, hedonism (designer drugs from the printer, two week binges in bars and nightclubs), sex.

There is though much, much more going on here. It's a powerful, character driven story. We feel for Adriana, for Ariel, her daughter, for Lucashino, her grandson, for Flavia, surrogate mother of three of Adriana's children. McDonald makes them into real people, fascinating people. It's a long book and - from a certain perspective - not a great deal happens much of the time but simply spending time with these characters in enthralling in itself. Yes, there is scheming, there are Machiavellian plots within plots - betrayals, daring coups and simple brutality (I lost count of the number of deaths in the book). But that is almost incidental to the developing relationship between Ariel and Marina, or between Marina and Carlinhos, or the baffled hurt between Wagner and Adriana or - even - the bluff and bluster among the Mackenzies. (Another Dune parallel: the Mackenzies may fill the same niche here as the Harkonnens. They may also have a paralysed, brutal patriarch.  But they are realer, better portrayed, more three dimensional).

This may not be an action filled book but, when it does happen, the action is also real, nail biting and high-stakes - from the opening, a barefoot moonrun through freezing/ boiling vacuum, to the final page.

Like its comparator this is a book full of ideas, portraying a credible world crowded with possibilities.

Above all it leaves you wanting more - and promises to be able to sustain more.