The Traitor by Seth Dickinson 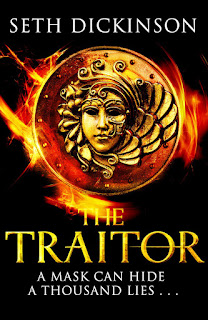 When The Traitor was recommended to me I was told it was dark and, gosh, is that true. It won't please the "I didn't like the central character" crowd at all. But it is a cracking read nonetheless.

Baru Cormorant, the traitor of the title (something made explicit in the US version which is called The Traitor Baru Cormorant) certainly grows and matures over the course of the story. We meet her first as a young girl on the island of Taranoke, living with her family - her mother, Pinion and her fathers Salm and Solit. Strangers have arrived on the island, merchants from Falcrest with their strange paper money and their tempting goods. "The Masquerade sent its favourite soldiers to conquer Taranoke: sailcloth, dyes, glazed ceramic, sealskin and oils..." The Masquerade is a strange Empire, funded on the overthrow of an apparently decadent aristocracy, alive with missionary zeal: it aims to not just to conquer but to rule and control, imposing a harsh, Puritanical system of morals (one certainly inimical to a family with two fathers) and ultimately controlling racial "bloodlines" as though people were no different to livestock.

Yet it is a strong Empire, and it rules intelligently, finding talent wherever it arises and pressing it into service. As with Baru, who turns out to be gifted, a savant who willingly enters the school of the Charitable Service and trains for the gruelling Civil Service exams. (This may be the first fantasy book I've read where the central character is an accountant!) Even though the Masquerade has murdered one of her fathers in the most horrible way imaginable.

So: Baru is a traitor to her people? Perhaps not. Se declares to herself that she will rise within the Falcresti civil service and bring liberty to Taranoke. So: is she a traitor to Falcrest? Both, seemingly - and she certainly harbours a secret that would bring punishment from her new masters: she loves women, not men. Such "tribadists, once discovered, are dragged to the Cold Cellars for surgery to correct the "defect".

Baru is sent to a distant, Northern province, the puzzling territory of Aurdwynn, newly conquered, divided between its quarrelsome Dukes (and Duchesses), fragmented by geography. Here she must prove herself to the Masquerade. Even as she learns that the name of her homeland has been changed, she must demonstrate both loyalty and ability. But here is a dilemma. Aurdwynn is on the verge of rebellion. Should Baru join the rebels - and should they succeed - she will indeed gain power. But can they succeed? At the heart of this dilemma is the so called "Traitor's Qualm": the lukewarm will only join a rebellion once they are convinced it can succeed, bit to succeed, it needs their support. Can Baru find a way to break the Qualm? And what will be the effect on her calculation of the - highly distracting - Duchess Vultjag, who begins as an enemy but could easily become something else.

And if she establishes herself in a freed Aurdwynn, what happens next? What will become of her family left on Taranoke? There is a strong focus on consequences, and nobody trusts to wishful thinking (or, indeed, trusts very much at all).  The book is written in grain, in coin, in the practicalities of transporting and feeding soldiers. It is not a story about a tiny band defending what is right against the dark forces of an evil empire - the revels do some truly awful things and many of them deliberately while the Falcresti saying, "Order is preferable to disorder" has much force.

Despite the moral ambiguity it's a highly engaging book, full of plots, gambits, strokes and counter-strokes. Baru navigates these deftly, and in Aurdwynn Dickinson has a developed a suitable theatre for politics and treachery both between the different Duchies and between them, Baru and the Falcresti authorities. There are wheels within wheels here: Baru's post is ostensibly that of Imperial Accountant but she is also involved with a shady cabal which she deduces is actually the real power behind the Falcresti throne - and their interests don't always seem to be aligned with those of the Imperial Governor.

Baru is increasingly isolated, turning to drink as she sacrifices more and more to her need for power and suppresses more and more of her true self. The transformation from the happy, bright girl of the early pages to the later Baru is expertly, if grimly, done: in summary this book does not make for light, escapist reading but is nevertheless an excellent read. I'd strongly recommend it.