Review - Made to Kill by Adam Christopher 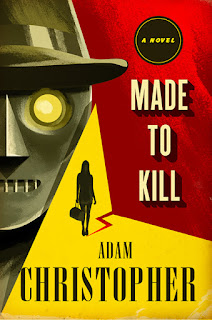 
I'm grateful to the publisher for letting me have an ebook copy of this via NetGalley.

This is the first volume of a projected trilogy featuring Raymond Electromatic, PI (ostensibly) and the last robot on Earth. Based in Los Angeles in an alternate 1960s full of shady nightclubs, dangerous dames and mean streets, Raymond is in reality an assassin (how this came about is summarised in the book, but told in more detail in Christopher's earlier ebook novella Brisk Money so if you plan to read this book you might want to try that one first).

Working with his partner Ada the AI (there are lots of sly tech and SF and cultural references here - at one point Raymond has "a feeling somewhere in the diodes down my left side", at another a woman turns up who "had a tattoo of a dragon curling down her spine") Raymond uses his PI status as a cover for a profitable line in killings. Or so he's told - as his memory tape only lasts a day, he wakes afresh every morning with no recollections.

So it's no surprise when a beautiful woman walks in wanting someone killed...

Full of noirish references and Cold War chicanery, this is a fast paced and action filled story though the plot doesn't perhaps bear too much examination. And given that Raymond weighs one ton and is built from steel plate, there's little sense of jeopardy, of danger, of Raymond running the risk that he'll be beaten up and left an an alley somewhere. Rather, I'd say the book is best seen as a framework for Raymond's deadpan dialogue ("I laughed. I'd been practicing. It sounded like two rocks going for a joyride in a clothes washer" "If I had an eyebrow I would have raised it, but I didn't, so i just kept on going down") and for the developing relationship between him and Ada.

We never glimpse Ada. Her hardware is hidden in a computer room from which occasional sounds emerge (the clacking of reed relays sounding like a typewriter) but she only communicates by telephone, calling Raymond to offer advice or trade wisecracks. She is though firmly in control, giving Ray his orders - and it was her idea to go into the assassination business, strictly as a money raising venture (that brisk money again). Yet Raymond has his own ideas about her, hearing her as a femme fatale, feet up on her desk, wreathed in smoke. Can robots dream of electric girls? It seems so - especially in one episode towards the end of the book when we almost expect Ada to appear from behind the curtain.

I would hope that the other books in this series will follow that relationship as it evolves (it already has, to a degree, from the earlier novella to this (still comparatively short) book as well as revealing more about Raymond and Ada, their mysterious maker, and exactly what they're up to (I don't quite buy the whole PI/ assassin step somehow...)