Europe at Midnight by Dave Hutchinson 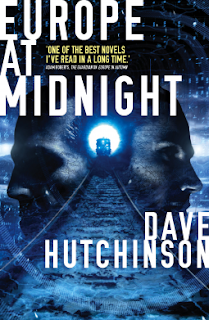 Europe at Midnight is a companion, rather than a direct sequel, to Hutchinson's Europe in Autumn. The earlier book introduced a near-future Europe fragmenting busily into pocket republics, principalities, duchies and Free States - there are over 600 entries in the Eurovision Song Contest and the whole thing takes five or six days. (The horror!)

[SPOILERS: if you haven't read Autumn already - and you really should have - go away and read it now]

...a hidden country, the Community, existing alongside and just round the corner from our world. The gateways to this place are lost (you could get there by train from Paddington, but the branch line closed and is now overgrown) and we don't know about it, but its residents - descendants of English émigrés from the 19th century - watch us, and do meddle in our business while living in a strange, pallid, 1950s kind of world, all tasteless food and tweed jackets.

Just how much they meddle is only slowly revealed here, and I'm not sure that even by the end of the book we have plumbed the full depth. The third book should be very interesting.

As this is not a sequel, we don't meet the same characters as in Autumn (although I may have missed a Courreur or two somewhere). Instead there are two new protagonists - the unnamed narrator, who sometimes goes by the nom de guerre Rupert of Hentzau, and Jim, in England. Both work in Intelligence: Rupert in a strange place (The Campus) which resembles a university that has declared Independence, Jim in the (English) Security Service. They are conscientious men, patient men who, starting at opposite ends, gradually try to unravel the tangled relationship between Europe and the Community. At a cost.

Along the way Hutchinson delivers many delights - from the first glimpse of modern society through the eyes of a man who had never seen it before, to the refined calm of a backwater city on the other side of the Community. The book unfolds slowly and grows on you: much of its charm is in the gentle way it builds things up - for example Jim's methodical enquiry into a stabbing establishing his attention to detail and sense of duty, or his cautious friendship with academic-turned-spy Adele Bevan, "the only person in his life who never used a false identity".

Which isn't to say it lacks drama or action. Almost from the start, characters die just as you're getting to know and like them. Several factions are in play and there's little to choose between them in ruthlessness. Indeed, as the story develops and the stakes get higher Hutchinson almost makes the reader sympathise with a degree of ruthlessness, used in the right course. Almost, but not quite. Because despite everything, both "Rupert" (he says his name at one point but we aren't privy to the secret - would we have recognised it?) and Jim are decent people and they are the heart of this book. And they are not, in the end, ruthless men.

Finally, we do get a glimpse of some old friends from Europe in Autumn, and I hope this means that they will feature in the next book. Certainly thing set up for a dramatic conclusion to the sequence.

A wonderful, fun book, a book to be savoured.