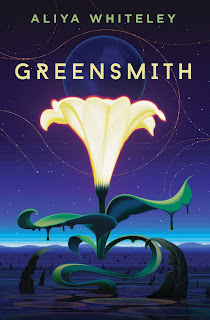 Greensmith
Aliya Whiteley
Unsung Stories, 12 October 2020
Available as: PB, 342pp, e
Source: advance e-copy
ISBN: 9781912658077
Greensmith is a richly imagined, empathetic SFF adventure on the grandest of scales - which also casts a slightly jaundiced eye on one of the most celebrated franchises in the genre.
Penelope Greensmith is working on a project - to catalogue and preserve the entirety of the world's flowers. She's assisted in this by an ingenious device her father (who began the work) left to her. Called the Vice, it has take a flower and compress its essence, its information, into a disc from which images and the plant itself can be recovered. Gradually, the storage racks in Penelope's cellar fill. She is ruthless in her task - even breaking into greenhouses at night to "acquire" specimens - but accepts her work won't be complete in her lifetime.
The background to Penelope's life is vague - there has been a War, in which people have 'fallen prey to an insidious, crawling mass delusion that had been carried by flags and leaflets and radio waves to their doors. Or perhaps they were just bored...' The only impact of the War seems to be that certain events have been erased from collective memory, but even that is uncertain. It would have been nice to know more about this - but the story moves rapidly on, to the day when Penelope's life is turned upside down by a fast talking time-and-space-travelling stranger who persuades her that, RIGHT NOW, to save the universe, she must join him in an improbable quest, must leave behind all she knows - her adult daughter, her cottage - and embark on a quixotic, madcap adventure.
Together they form a team. 'The legendary and mysterious space traveller... And his assistant.' Yes, The Horticulturalist (Hort for short) is famed throughout the universe. Yes, he has access to an apparently infinite storage space/ home, filled with wonders. Yes, lots of running is involved. I think you know exactly what long running SF TV series that echoes (don't you?) It's not though the only allusion here: Whiteley has a but of fun I think - she also refers to 'a long time ago, in a galaxy far, far away' and drops other references too ('I am the one wearing the red shirt. I am expendable').
Penelope responds as you'd expect - as assistants are always written, eager to experience wonders, but also desperate to do whatever she can to save her daughter Lily, and the Universe, from a mysterious, plant-destroying virus. She plunges into danger, as Hort aids oppressed creatures and then confronts his greatest enemy. This middle part of the book is a real triumph of writing and the imagination: grappling with the fact that Penelope's, somehow, there and not there - Hort's method of travel isn't exactly physical - and with the way in which reality is so strange that she only experiences a translation of it, the nearest thing she can grasp but not the truth. It's actually rather disconcerting. No snippets I could quote here can really do it justice. The effect on me was rather like that final section of the film 2001, with strangeness upon strangeness and all familiar landmarks missing.
If you feel that's all just too rich for you, too jarring, please don't give up. This book contains its own quiet rewards - from the sheer glory of Whiteley's writing to that rather sceptical, questing examination of the time traveller himself. What can you really say about such a being? What degree of ego and self assurance does it take to shift worlds and play with the course of events as he does? ('...a selfish, spoiled, unaware and unrepentant idiot... [who] could be classified as Very Dangerous Indeed...')
Above all, what, exactly, is his relationship in the end with Penelope?
It's hard to be clearer than that without spoilers - which, I assure you, you don't want for this particular book.
Enjoyable from the first page to the last, this book is enthralling, baffling, weird, deep, quirky and in the end - I thought - very, very sad.
In short, I'd recommend.
For more information about Greensmith, and to buy a copy, see the publisher's website here.