#BlogTour #Review - The Once and Future Witches by Alix E Harrow 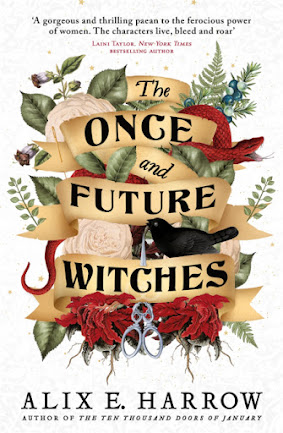 The Once and Future Witches
Alix E Harrow
Orbit, 13 October 2020
Available as: HB, 513pp, e, audio
Source: Advance copy provided by the publisher
ISBN: 9780356512488
I'm grateful to Nazia at Orbit and to Tracy Fenton at Compulsive Readers for an advance copy of The Once and Future Witches to consider for review and for inviting me to take part in the book's blogtour.
The idea of witches continues to fascinate in the 21st century. It's a part of culture we all imbibe in waves.  As children there's the raddled Hallowe'en crone with her cauldron, going all the way back to the Scottish Play, sinister figures from fairy tales and L Frank Baum's Oz witches. Then there's the historical corrective that we all (hopefully) acquire later, knowledge of the actual persecutions visited on supposed witches for hundreds of years. Finally, there are revivals and claimed continuities, overlaps with modern Paganism. It all gives a rich field for the fantasy author, and Alix E Harrow has made full use of that latitude to create a kind of unified mythology: her 19th century, USA set story tales place in a world where witches had been real, once a part of everyday life and therefore, neither malevolent magicians nor (wholly) innocent victims, rather simply people, good and bad, using natural powers.
But all that changed with the persecutions and by the time we arrive in New Salem, witches are banished, proscribed, remembered only in children's stories and nursery rhymes. They still serve a purpose, though, for the men who rule this world - a dreadful warning of the powers of women, of the need to keep them under control (shackled and bridled if need be, and always dwelling in the shadow of the stake).
Such is the situation facing the three Eastwood sisters, Juniper, Agnes and Bella at the beginning of the book. Brought up by their widowed and despotic father, the sisters have had plenty of experience of male power and abuse (we are never told exactly what he did to them in that cellar but enough is said for a shrewd guess) but rather than building solidarity between them it has broken the family and they are now scattered - Juniper a wandering fugitive, Agnes toiling in a dark Satanic mill and Bella, after being subject to the regime of what sounds like a dreadful reformatory, a librarian.
So when the sisters meet, apparently by chance, in the city of New Salem, it's not exactly a happy reunion. While it's painful to read at times, Harrow's portrayal of the sisters and their past and present relationships is powerful and convincing. There's a mixture of guilt, blame and fear between the three resulting from their desperate attempts to protect themselves from their father and from the circumstances in which Agnes and Bella, the older sisters, left Juniper behind.
Those breaches can't be wiped away in a happy-ever-after and overcoming them, building trust and looking to the future isn't easy which is unfortunate not only on a personal level but because - as the scraps of story and rhyme included here emphasise - there always need to be three witches, and unless the young women  can unite, they will be vulnerable to a threat far more serious than popular prejudice and the odd Inquisitor.
Harrow's writing here is sensitive and realistic. Each of the three has her own problems, and sees her own solutions - where that's Bella's research among the stacks to discover the lost power of witchcraft, Juniper's enthusiastic, if slightly sung-ho, embrace of Suffragism, or Agnes's aim of lying low while using her few remembered spells for the betterment of those around her. Together, their different experiences give a powerful overview of the persecution and domination of women, reaching beyond fantasy to the struggles for equal rights for women, people of colour and working people in the late 19th century. Because of course the forces that would oppress and destroy witches are the same forces that find a racial divide useful and oppress those workers in factories and mills and on the railroads.
This interweaving of the magical and the mundane is deftly done (there's a down to earth vein of romance here, as when one character remarks to herself that 'she doesn't think that any man has ever brought her hot pies') and brings in a wider cast of characters who open the eyes of the sisters to these wider issues. There is Miss Cleopatra P Quinn, journalist and stalwart of the Colored Women's League. There is Mr August Lee, labour organiser and dabbler in magic. And there will be more, a diversity of women and men with their own secrets and vulnerabilities. And all will be guided by those half-remembered scraps of lore and learning preserved by the Sisters Grimm, by Charlotte Perrault, Andrea Lang and the other classic collectors of stories who you will doubtless have heard of, and in the rhymes and chants that Harrow include at the start of each chapter and which may sound both familiar and unfamiliar.
It's an absorbing, bewitching tale and one that - after The Ten thousand Doors of January - confirm's Harrow's place at the heart of modern fantasy.
For more information about The Once and Future Witches, see the Orbit website here - and don't forget the other stops on the tour which are detailed in the poster below.
You can buy The Once and Future Witches from your local bookshop, who will be grateful for your support, or online from Hive Books, Blackwell's, Foyle's, WH Smith, Waterstones or Amazon. 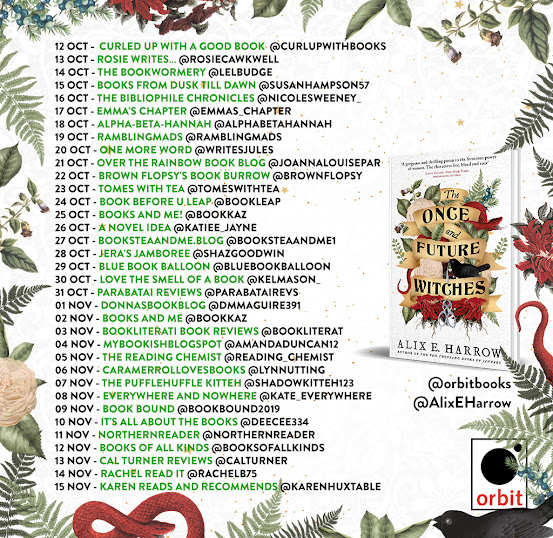