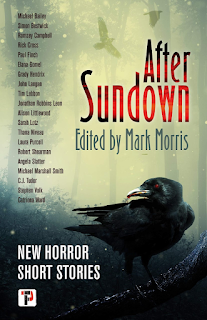 Overall, this is a strong collection which will have you looking uneasily at midnight shadows, bolting your doors and avoiding lonely, derelict places after dark. Unless, of course, you're actually a monster already...

For more information about the book, see the publisher's website here.  You can buy After Sundown from all the usual places: your local bookshop (they need your business, now more than ever!) or online from Hive Books, Blackwell's, Foyles, WH Smith, Waterstones or Amazon

And don't forget - my fellow blog tourers (see poster below) are, like me, all connoisseurs of the twisted, the uncanny - do join them to share their perverse pleasure in the chills and terror to be found After Sundown!