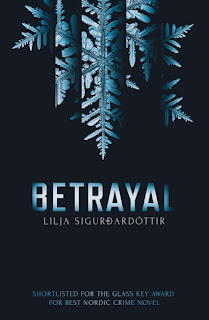 Betrayal
Lilja Sigurðardóttir (trans by Quentin Bates)
Orenda Books, 15 October 2020
Available as: PB, 276, e, audio
Source: PB ARC
ISBN: 9781913193409
I'm grateful to Karen at Orenda Books for an advance copy of Betrayal to consider for review and to Anne Cater for inviting me to take part in the tour.
I'm so glad to be joining the Betrayal blogtour. With Jane Hunt Writer, I may be covering the very last day of the tour, but I'm not clearing away glasses and tidying up the crumbs, this party is still in full swing!
In Betrayal, Lilja Sigurðardóttir gives us a close study of former aid worker Úrsúla, newly returned to Iceland after traumatic postings to Liberia during the Ebola epidemic and then to Syria. Úrsúla is clearly suffering from trauma (she has some harrowing flashbacks) but also feels rudderless and out of touch. She jumps at the opportunity to take on a Government role as Minister for the Interior, with all the challenges that will entail. Husband Norri isn't quite so sure - but there's a coolness between them and she doesn't let that stop her.
While Sigurðardóttir doesn't explicitly make the point, it's clear this is the same Iceland as described in the Reykjavík Noir trilogy, since certain events and characters from Cage are referred to. The detail is less relevant than the political upheavals posited in the earlier books, leaving a situation where an outsider might credibly be brought in to a fractious coalition.
Again, like the earlier books, there is a crime in the story, but the focus isn't on solving that crime but rather on the cleavages and dilemmas that its existence poses. The little group of characters among whom the consequences play out are varied in background and motives: Úrsúla herself, her uptight Permanent Secretary Óðinn (he greets her by asking after her health, he doesn't want another Minister who gets ill),  TV presenter Greta who's on a quest for true love, Stella the cleaner, dosser Pétur and Úrsúla's bodyguard/ driver Gunnar. (Sigurðardóttir has fun with Gunnar's obsession with fitness and self-control - I felt quite story for him).
The themes of the novel are also wide: bureaucratic inertia, in particular the failure to investigate a complaint of rape, politics and avoiding unpopular decisions, personal tragedy (Úrsúla's father died in a police cell), social media stalking. Reykjavík's seamier nightlife gets a look-in, as Greta and Stella meet at one of the wild parties thrown by 'the Annas' and - from the UK perspective - there's a fascinating vision of Icelandic society as open, with people from all walks mingling in ways that would just feel unreal here (in particular, of course, a non-MP, non-Party ember brought in as a Minister).  Not that it's a paradise, though - Sigurðardóttir remarks somewhere on the conferral of status through one's car and how only the poor ride on buses, and there's a nasty vein of misogyny directed at Úrsúla and at other women here.
Above all the book is, though, as I've said, a character study. Úrsúla is powerfully and convincingly portrayed, her traumas playing a large part in how she behaves and what she does. It's a numbness she suffers, dulling the senses and the emotions and pushing her to experiment to regain some feeling. Not perhaps the ideal frame of mind to be taking politically sensitive decisions (or dealing with some of the egos that Úrsúla encounters in her Department - including men who seem to take it as a personal insult that a woman is in charge of them). And that's even before she begins getting threatening notes and online hate messages...
Overall, Sigurðardóttir plots a clever, involving story that not only has plenty of twists but keeps the reader guessing as to what (and who) exactly is behind it all. While Úrsúla may be the main focus, the ensemble of characters really brings the book alive and I hope we might meet some of them again in future books - Stella, for example, is fascinating.
As ever, Quentin Bates's translation is clear and lucid, without "Englishing" the language and settings - these are clearly Icelanders in Iceland. And it's all very well observed - I have been one of those unfortunate tourists who arrived in Iceland in the depths of winter and didn't get to see the Northern Lights for the mists and fog!
I would strongly recommend, and if you haven't read Reykjavík Noir yet, this relatively standalone book may just way to sample Sigurðardóttir's writing and get yourself hooked...
For more information about the book, see the Orenda Books website here. Or see the other stops on the blogtour (poster below). You can buy the book from your local high street shop, or online from Hive Books, Blackwell's, Foyles, WH Smiths, Waterstones or Amazon (not affiliate links). 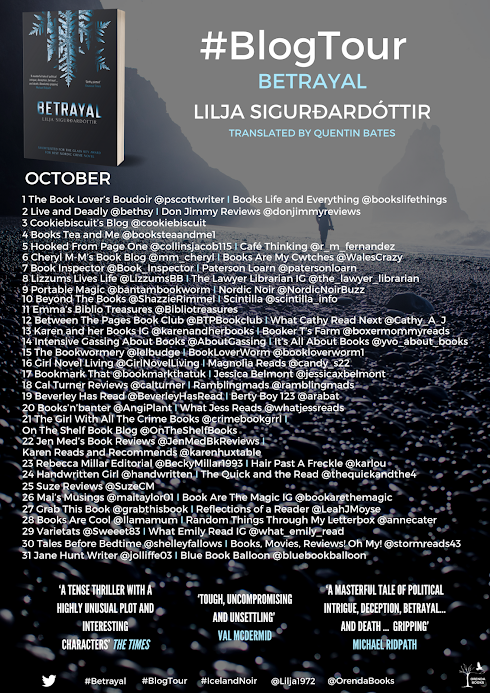