#Review - The City We Became by NK Jemisin 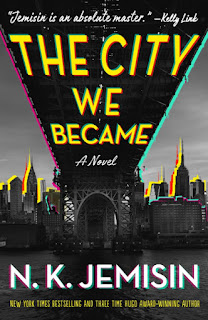 I'm grateful to Nazia at Orbit for a free advance copy of The City We Became.

One of the recent collections I've enjoyed most was NK Jemisin's How Long 'Til Black Future Month? which includes a story ("The City Born Great") in which New York is, literally, born - in the form of an avatar. The birth is complicated by an enemy, which wants to destroy the newborn city, but all is, in the end well.

Jemisin discussed in her introduction the origins of some of her short stories, including that some were written to try out ideas which might be the basis of longer works. So it shouldn't have been too much of a surprise - but was a delight - to see that "The City Born Great" was only the start, that rather more was going on around that difficult birth... and that the story wasn't over yet. Still isn't over, because I think (I hope!) that TCWB will have sequels.

That original episode features, slightly reworked I think, as the prologue to this novel, where the consequences and reality of a city's birth are explored in more depth. It was already clear a city-avatar isn't all powerful, but what can one do and be? Why would anyone wish to harm one? Who would wish to harm one? Answers to these questions come, sort of, but if you're conversant with your SFF, the repeated motif of tentacles and alternate dimensions may give you a hint of something that wasn't spelled out before.

The City We Became is an exciting, fast moving and high stakes story but it's more. I loved, for example, that Jemisin isn't just landing on New York as a random, if obviously appropriate (big, already much storied, impossible to ignore) city. She takes time, and takes care, to give her avatars personality, rooted in their localities.

Yes, avatarS. LocalitIES. Plural. It turns out there is more than one - in fact there is one avatar for each of the city's Boroughs: Brooklyn, The Bronx, Staten Island, Queens and Manhattan itself. And another for New York as a whole (though this, sixth, avatar is missing and in danger). As they suffer attacks from the Enemy, we learn more about each. There is an interplay here between them as people - each with a distinct history, a real place in the world, real attitudes and prejudices - and between the loci of which they are genii. For example, Bronca, avatar of The Bronx, an artist and supervisor of a community arts project, is tough, but untrusting. She's been hurt, looked down on. At first she refuses to cooperate. The other boroughs will, she declares, have to look after themselves, it's what The Bronx has always had to do. And the others also play to the characters of their boroughs whether loftily superior, stand-offish, welcoming or indeed, newly arrived. (I've never been to New York, but the characterisation here is so well done that the book would I think feature as a handy guide before a visit, indeed it conveys what a guidebook never could).

There is care and attention in this book both to the founding myth of New York - that strangers come there to be part of something, to make it - and to the reality that the history of the city is, has to be, built up from layers of colonisation, assimilation and appropriation, going back to the original swindling of the land from the native Lenape (who, nevertheless, survive to appear in this book, if disguised). This complex history is something Jemisin refuses to background: it's part of the tension between the avatars (wait till you meet Aislyn, avatar of get-off-my-lawn Staten Island). It is both their weakness, and their power.  It's part of what makes New York, New York. The unwinding of the story is about the teasing out of those historic relationships, but it's about more than history, it's also about how they build something together.

Of course many novels feature a team of strangers learning to work together. In itself that wouldn't be so special. Jemisin though does so much more with the idea. That unity in diversity, in conflict, is something she locates, I think, as the essence of New York, and coupled with the vulnerability of these avatars it makes the stakes so much higher. While they have powers, the six are located firmly within human society and face the risks that implies: one is subject to coercive control; others, people of colour, are liable at any time to the wrong sort of attention from the police; another is homeless with doubtful immigration status; and so on. Above all they have to learn what they are facing - and the alien threat is itself mutating, changing. Even the advice and support of established cities is not necessarily going to help.

And just as Jemisin is, in telling this story, acknowledging New York warts and all (the dubious origins, the racist police, the gentrification, the power of finance) so at another level she is doing the same with the genre she's working in. At one level this is a Lovecraftian horror story in which nameless evils from unspeakable depths of reality are at work. But wasn't Lovecraft a rogue, a racist and a misognynist? Well, yes. But, just as NY, founded on layers of theft, slavery and oppression can be recovered, turned into something glorious, so we see here HPL's prejudices, fears, certainties transcended. The threat here is embodied in the city's vulnerabilities - white flight neighbourhoods, trendy alt-Right artists trucking in stereotypes, those police - but these things can be faced, can be opposed, in solidarity, and love, and with trust and cooperation. That's a deeper power than just a team of oddballs learning to work together, and it's the glory of this book.

For more about The City We Became, see the publisher's website here.