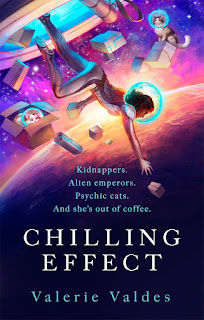 I'm grateful to the publisher for a free advance copy of Chilling Effect.

Valerie Valdes's debut space opera is a galloping spree of an adventure, featuring a resourceful and ruthless human hero, Captain Eva Innocente, umpteen species of aliens, a space Emperor with a bad case of entitlement and a worse attitude to women, kidnappers, ancient artifacts, bad parenting, and cats. So. Many. Cats.

Eva is just trying to make an honest living (at last!), captaining her freighter, La Sirena Negra, and avoiding trouble. Possessor of a shady past (we are given hints but not told the full story) she thinks has got out from that but runs into trouble when her latest assignment - those cats! - goes wrong, and into even more trouble when said Emperor attempts to procure her when she stops for a break at a space station.

Then something really bad happens, and she falls into the power of The Fridge, the biggest gangster syndicate in the galaxy.

I loved the style of this book, with Eva fleeing one tight corner after another. It's a fast paced book with plenty of zapping and lots of bangs, as every assignment she undertakes turns - inevitably - into a firefight. There's a bit of the atmosphere of Douglas Adams, notably in the array of alien species - including one, the quennian, that communicates largely by smell - but most evidently in the sheer zest, the absolute intensity, of the writing: Valdes is clearly having fun.

It's more than that, though. Despite the fractured, episodic quality of the story - with little time wasted on travel between the various planets, Gates and other sites of interest - there is emotional heart here as Eva must negotiate her own past, her relationship with her father and sister,  her dealings with her crew who seem devoted to her (a devotion she hardly shows much sign of deserving) and most of all, her feelings for Vakar, one of the quennians and an alien for who she has more then a bit of a thing going.

Reader: prepare for a lot of "Will they, Won't they?", conflicted feelings, Duty vs Desire and even some Secrets as a backdrop to all the mayhem. The two strands balance perfectly, keeping us in tension through most of the story but giving... release... where it counts. It's a fun read.

Also packed with SF and cultural references (a moisture farmer who wants to fly space ships, the possibility of attacking a space station with a lucky shot into an exhaust, a woman in a fridge, a bit of "well actually" that leads to trouble) that you'll enjoy spotting and with psychic cats*, this is an entertaining and joyful novel which seems certain to be the start of a popular series.

(I would say, you might brush up on your Spanish before reading, Eva tends to lapse into Spanish in moments of stress).

For more about the book and to read an extract, visit the Orbit website here.

*We could actually see more of the cats? Please?