#Review - Black River by Will Dean 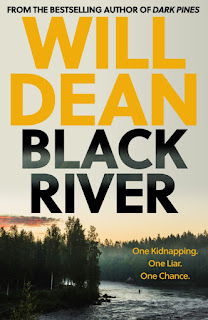 I'm grateful to Point Blank for a free advance copy of Black River to consider for review (a SIGNED copy no less, lucky me!)

Tuva Moodyson is back! - metaphorically, in this her third adventure, and literally, in that she's returned in a hurry to Gavrik, the place she disparagingly calls "Toytown", the little town in the northern forest of Sweden.

When last seen, Moodyson was heading South for a new job and a new life, leaving behind both her friends - her old boss Lena, her best friend Tammy - and enemies (too many to list).

Now, four months off the booze, she's back to settle debts. Tammy has gone missing, suspected to have been kidnapped (but nobody in Gavrik seems to care - after all, Tammy's an outsider, not even of Swedish ancestry) and Tuva's going to find her.

In this third adventure, Tuva's sharper, even more determined, even more detached. In the previous books there was a sense that, however strained her relations with the townsfolk, she was part of things with a stake - a tenuous, small stake, but a stake - in being accepted there. Part of the drama, part of the fear, of Dark Pines and Red Snow was seeing her stretch that, risk being shut out, lose her place, her role.

Well, in Black River, Tuva officially doesn't;'t give a fuck. She'll go anywhere, rile anyone, poke and pry and upset and offend and she WILL FIND HER FRIEND. It's heartbreaking to see the indifference many of the townspeople show towards Tammy: yes, they'll buy her Thai food from the van, food she serves late into the Arctic nights we saw in the previous books, but they won't actually lift a finger to help find her. Like other young women who have, it seems, gone missing from Gavrik, she probably brought it on herself.

Again, Tuva's left, with little help (Lena is the exception) to sift for info, ask the awkward questions, face danger when she encounters some deeply weird locals. Sally 'The Breeder' for example is chillingly strange - Dean skilfully conveys something just a bit... off... in her manner which gave me the creeps even apart from her sideline in breeding - and killing - snakes. But she isn't the only one.

And then another girl goes missing.

All this takes place against a background of Midsommar, the endless days, the heat, the clouds of bugs fro the forests - as inhospitable a season in its way as the midwinter cold of the previous books and one that Tuva hates with the passion of a lifelong sufferer. And yes, I have seen that film - and I think Dean cheekily deploys references too, such as the kulning or the flower bedecked poles that are the centrepiece of the festivities. Although that's not quite where we are in terms of genre, this adds a rich layer of meanings on top of the townsfolk's insularity ('They're Swedish!' Tuva is repeatedly told of some food, whether delicacy or everyday staple, to encourage her to try it - a subtle rebuke to her friendship for Tammy who after all is known for selling not-Swedish food) and also on top of Tuva's regret for her busted up family life (which we learn more about) and what she sees as her earlier desertion of Tammy.

It all makes for an almost unbearably heavy emotional brew which robs Tuva of sleep, distracts her from the task at hand and shows her threats and enemies everywhere (but remember, she's faced death twice in the previous books). My heart was in my mouth as I read the closing section of this book - Tuva Moodyson is a protagonist one really comes to care for, to identify with and I wan ted her to come through this sticky, intense time without more scars, more wounds - physical or emotional.

If you've read Dark Pines and Red Snow you will sort of know what to expect but here Dean cranks everything up several notches, this book is more intense, more suspenseful and - under that Midsommar sun - it manages to actually be darker than them.