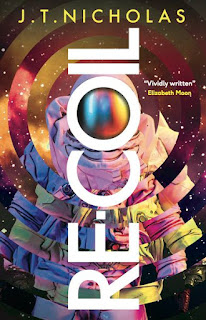 I'm grateful to Sarah at Titan Books for an advance copy of Re-Coil and for inviting me to take part in the blogtour.

A smart, action filled SF adventure which blends zombie thriller, conspiracy theory and dystopia, Re-Coil takes us to the far-ish future (it's not clear just how far) where personalities, memories, souls - whatever you want to call them - can be backed up and then downloaded, after death, to new bodies or "coils". (As in Hamlet: 'When we have shuffled off this mortal coil...')

Nicholas writes intelligently and explores the consequences of this technology for future humanity, dwelling on the practical rather than the ethical or philosophical. So we learn that the solar system is becoming crowded, that coils are in greater and greater demand so those with less than top of the range insurance may have to wait before being 're-coiled' - and may suffer from less than ideal wetware.  Our hero, Carter Langston, is a salvage expert, operating on the edges of safe space, on the edges of legality, to retrieve valuable stuff from drifting ships - and his number I concern is keeping up his payments so that if the worst happens, he will get a decent coil for his next chance at life. (Even the uninsured get something - eventually - but it may be undesirable in various ways, from having manufacturing defects to being the wrong gender).

This setup allows Nicholas to kill off his hero in the first few pages (not a spoiler, it's in the blurb) and then bring him back to, in effect, investigate his own murder. That's the conspiracy bit. The dystopia - well, Langston is pretty blithe about the whole scheme, seeing effective immortality as a prize worth the inconveniences we see here, but I did wonder. The need to keep up those insurance payments, and a system where your soul is effectively owned by a private corporation which can dictate what happens to you after death - well, I did wonder. (As the zombies: wait and see!)

It is a fun read. For much of the story, Langston and his crewmate, Shay, are on the run from whatever killed them at the start of the book, Shay having the added disadvantage of having been re-coiled into a body that is a long way from her ideal (and no, you can't simply ask for another go). Nicholas is very good on what this might feel like - not only the immediate effects such as suddenly having more muscle that one is used to, but deeper issues to do with body image and identity. Langston, who comes over at the start as a fairly unreflective man-of-action type, needs to up his game to support Shay and we learn more about both of them, the characters resolving from action man and nerdy hacker to much more nuanced personalities. (As does the assassin with whom they repeatedly tangle).

The conclusion of the story is an extended combat sequence very different in tone from the rest of the story, the stakes having been raised from immediate survival to a potential threat to the human race at large. Nicholas maintains the tension right to the end - an achievement given that the "re-coil" idea seems to take away a great deal of the jeopardy- giving us a gore-spattered and desperate finale. Very satisfying.

Throughout the book, Langston depends on his AI "agent", Sarah, to assist him with searching for information action, tracking things, and making quick judgements (as well as summarising documents and authenticating transactions). As well as being a plausible extension of your friend Alex or Siri, this allows the author to helpfully pass on facts without any too-obvious infodumps.

Overall I enjoyed this book, which convinces on its own level, in part by respecting aspects fo science which are often ignored: there is no FTL travel here, for example (though nor does Nichols make use of some obvious alternatives: how about transmitting your "back-up" across the aolar system to be inserted into a new coil? That doesn't happen here) and creates believable, engaging characters - who seem destined for further adventures?

You can buy Re-Coil from your local independent bookshop (which Blue Book Balloon recommends, if it works for you) including via Hive Books (who support local bookshops) or online from (among others) Blackwell's, Foyles, WH Smith, or Waterstones. (These are not affiliate links - I receive nothing if you follow them!)

For more about the book, visit the Titan Books website here.

And do check out the other stops on the tour! 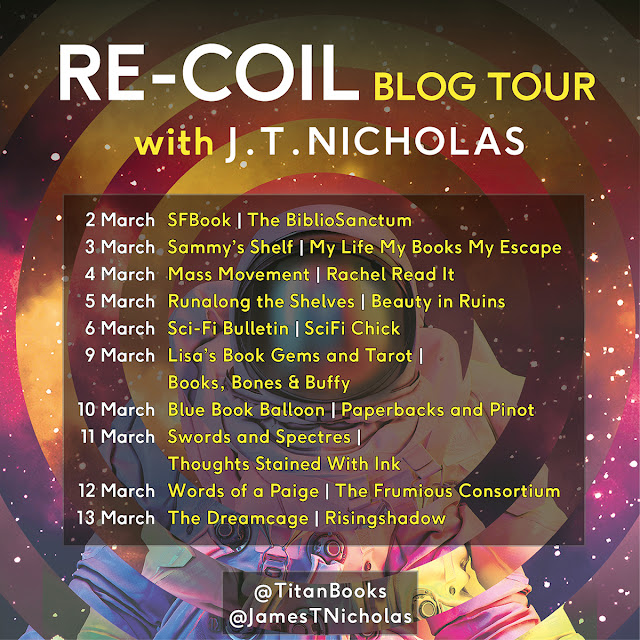