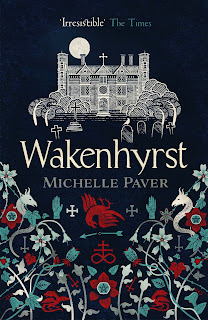 Michelle Paver's Wakenhyrst was published in April in hardback and is out today in paperback. When it first appeared I wrote that it was one of my standout books of the year and six months later I hold to that. You can't have too much of a good thing - so to remind everyone how good it is, here is my review. Again.

And look at that gorgeous cover!

I'm grateful to the publisher for providing a free advance e-copy of the book via NetGalley.

Having loved Paver's previous two supernatural-tinged novels, Dark Matter and Thin Air, I was delighted to see Wakenhyrst coming - and then to be able to take part in the tour.

Like Dark Matter and Thin Air,  at the heart of Wakenhyrst is the social structure of early 20th century England (England not Britain). I say that despite the fact that the previous books were not set in England: they still explored English notions of class and the way that English arrogance impinged on, and fell foul of, other cultures and places.

Wakenhyrst is, very much, set in England (with one short diversion to Brussels) and the English upper class scorn for the beliefs of the 'natives' that featured in Thin Air is here turned back on itself as a dilettante Edwardian gentleman, researching the obscure fifteenth century mystical biography of one Alice Pyett, goes to dark places despite (or because of?) his rejecting the beliefs of the 'lower orders'.

Edmund Stearne is a man 'of spotless reputation' but, to his daughter Maud, a forbidding and pernickety father ("You know my dislike of manhandled newsprint") who enthusiastically administers physical punishment. To his Belgian wife he is a tyrant ('It was Father who had decreed what Mama ate, read, did and thought...') As a girl, indeed as a woman, Maud is slighted, discounted, disregarded. Edmund knows what he wants - his wife pregnant (she suffers an endless series of miscarriages - Maud comes to dread 'the moaning'), his daughter silent in the nursery, and servant girl Ivy at his disposal ('Nor did he regard what he regularly did with Ivy as anything but the satisfaction of a lawful appetite'). Allegedly a religious man, it would be overgenerous even to label the contents of the diary we're allowed to read here as hypocritical. Indeed there's a vein of outright misogyny in Edward ('Women are all the same. Devious, hypocritical, corrupt') and also in his pals the local doctor and the Vicar. The subordinate role of a young woman in that time and place is made very plain: when she seeks their help in a crisis, Maud is threatened, told to stop being hysterical sent on her way. Throughout the book, Ivy and Maud are at odds, seeking to undermine one another, even though the cause of their problems is not their own relationship but the stultifying, patriarchal, power of Maud's father.

But this isn't just a story of how bad things were in the past and how much better they have become. Paver is shrewder than that. The book opens in 1966 with a quoted newspaper article which is, in its own way, just as patronising, just as set on keeping women in their place, as Doctor, Parson and Squire at their worst. Describing the discovery of some sublime artworks created by Edmund in his later life, it introduces the academic who first recognised them thus:

That article portrays the elderly, reclusive Maud, still living in her decayed childhood home out in the Fens, as at best, a bitter old maid, at worst, a murderer and witch - and naturally, as in conflict with another woman, her cook. Plus ca change... Initially unwilling to share the real story, despite the calumny directed at her, Maud eventually relents  (a storm has damaged the roof, she needs money) and admits to her confidence that same Dr Hunter.

We then hear Maud's account, interspersed with entries from her father's diaries. This is where the real story begins - of a lonely girl with a strict father, growing up amidst the wildness of the Fens. Young Maud's life is marked by contrasts, for example between the different customs, of her father and of the villagers, which she must or mustn't follow (sometimes she can't remember which is which). There's the language itself - while the elderly Maud speaks with a 'cut glass accent' it's clear that she is or was perfectly fluent in the local dialect:

In keeping with that, it's clear that everyone - not just the working people but Maud, her mother, Edmund himself - has recourse at one time or another to the potions and remedies of the village wisewoman.

There is the contrast between the entitled, complacent world of men (principally her father) and the second class existence of women.

And between the buttoned-up public attitudes of the trinity who preside over this world and their secret behaviour.

Above all, the story contrasts Edmund Stearne's public reputation as 'a rich landowner and respected historian' with a private dread that he has committed a terrible sin (even if he protests to his diary that he can't remember what it was, and that anyway it wasn't his fault). His fear drives an obsession with Pyett's text, which seems to him to parallel his own case. This is an aspect of the story that only surfaces gradually (there is a lot submerged in the Fen) and indirectly, and saying too much would spoil the effect. The slowly emerging picture does, though, underly a growing atmosphere of menace which makes this book truly Gothic. Paver signals what may be going on with language that alludes to the master of this genre, MR James, from details (toad-like carvings on a pew, Stearne's almost tripping as he comes downstairs, his feeling as if he had been bitten) to turns of phrase ( '...whoever painted that picture painted the demon from life') and overall themes (the fear of a hairy thing that has been let loose, the story's focus on a lone scholar and its being told, in part, looking back some fifty years through a manuscript account). We could be reading one of those stories where an accusing spectre haunts the guilty, slowly driving them over the edge of sanity.


Michelle Paver (photo: Anthony Upton)
Whether that is, in the end, the case - well, I won't say any more about that. You should read the book and make up your own mind. But it is clear that there is much more going on than in a classic ghost story, even though Paver uses that form expertly. Apart from the theme of patriarchy, I think there's also an exploration here of the creation of memory, of the importance of story - most obviously of course in older Maud's desire to control the narrative, as one might put it now, but also for example in the way that Stearne says in his diary that he remembers something 'though I didn't before' - he is a most unreliable narrator indeed and seems to me to be reinventing his life and outlook under pressure of - well, of whatever it is.  Maud sees Edmund's story take shape and come to life - and eventually realises how it threatens her and those she loves. And in the end she has to take control and make her own truth.

In describing how Maud does that, Paver has, in a sense, to go beyond the supernatural and show how some horrors are actually worse - because more universal - than the shades haunting remote mountain peaks or isolated Arctic bases and which her previous books turned on. Wakenhyrst depicts a sense of unearned entitlement, the systematic application of privilege and the embrace of hypocrisy, both in the Edwardian summer and the topsy turvy '60s, which to me is actually much more chilling than a vengeful ghost keening in the Fen.

It is a powerful, enthralling book which I'd encourage you to read. If you need any more urging, it's also a beautifully designed thing, the cover tactile and brooding, the endpapers leafy and glorious, the pages crawling with the life of the Fens - the design by Stephen McNally really enhancing the experience of reading this book (yes, I was sent an e-copy, yes I have bought the hardback - there was no way wasn't going to have this on my shelves). And there's much, much more than ice been able to cram into this review: the teeming wildlife of the Fens, Maud's later life - only sketched but Paver does it so well that we can join the dots - and even some romance.
Email ThisBlogThis!Share to TwitterShare to FacebookShare to Pinterest
Labels: 2019, 20th century, Feminism, Fenland, ghost stories, MR James