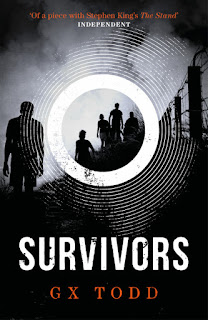 I'm grateful to Headline for a free advance reading copy of Survivors. Make that VERY grateful. This was one of my most anticipated reads of 2019 - and it didn't disappoint.

Survivors is a post-apocalyptic tale, the third (but not final!) in its sequence after Defender and Hunted. In this dark world, many people developed voices in their head - voices that urged them to kill others, and sometimes to destroy themselves. Enough of this, and civilisation soon dies. It's not so much the immediate effects, the gaps in the essential services, as the bonds of trust between strangers, neighbours, friends and even family dissolve, and it becomes a matter of kill first or be killed. Those affected by the Voices embark on a rampage, those unaffected hunker down, unable to group together in case they put themselves in danger.

Once it's over (but IS IT?) then, survivors wander the shattered remains of civilisation, seeking safety, shelter, and most of all - perhaps - meaning. Why did this thing happen? What comes next? Into the vacuum emerge cults, such that of the Flitting Man, whose spiral symbol is everywhere. Local warlords fight for territory and trade anything - including people - with one another.

It's a disjointed, scary background against which Todd has followed a scattered group, in particular, the troubled man Pilgrim, and Lacey, a young woman with whom he's travelled. In Survivors, we focus mostly on Pilgrim. For the first time we see his origins, and we also see his current life, including some vivid, nightmarish scenes where his very identity and nature is challenged. When the story proper opens (there is some prologue first) Pilgrim has just woken in an open grave and has no memory of who or where he is. The story then fills in details, but gradually and by jumping backwards and forwards.

If you're a fan of straightforward narratives you may find this a bit annoying (it didn't happen so much in the earlier books) but do persevere! I thought it wasn't going to work for me, but in fact it's a brilliant device. You will almost certainly be reading this book because you've read the previous two, but that probably means it's a little while since you did, and you may be hazy over the detail. How did Defender finish? Where was Pilgrim then? Who is Red? Who is Lacey, and what happened to her? All these names and events were in my mind somewhere, but also, not complete when I wanted them. There's a kind of fading in reading a series of books (unless you save them for one readathon) and a good author will work with that. Todd does. But not through a simple recap. Instead, here we have Pilgrim reconstructing not only his memory, but his identity. Todd makes it genuinely unclear who he is, lending a sinister light to all his exploration of her world, and we - the readers - don't know any better than him. Our sense of his history is rebuilt in the same way as his own.

So at times we have to trust (but who can we trust?) and at times, we think he's going wrong. The conditions and alliances in this world make it impossible to keep clean hands, impossible to separate "good" people from "bad". And remember, there are those Voices, which clearly have an agenda of sorts - theories about this and about the proper way to respond underlie much of the conflict in the book - so people here have an extra, hidden aspect (at least, those with Voices do - but again, can we trust someone who denies having a Voice?)

I don't want to make this book sound all tricksy and clever-clever. I think Todd does brilliantly match form to narrative, but even apart from this, Survivors is a vividly imaged story with well realised, involving characters set in a challenging and disturbing world. Pilgrim is a restless should, driven by a need to do - what exactly? Part of his frustration is understanding that. He thinks he has a purpose, responsibilities, duties, commitments, all lost in that void of his mind, and a great deal of his time is spent trying to understand them. But part of the risk of that all being so dark is, we don't know whether he is doing the right thing, guided by that lost part of himself, or whether he's being sidetracked by his history, experiences and attachments to things and people who are now gone.

Against that background it's genuinely affecting to see moments when he recovers something or, almost better, when an aspect of his past, a friend, rediscovers him (when you read the book you'll know what I mean) and also heartbreaking when he has to leave them behind again.

An explosive, engaging third part to this quadrilogy and one I'd urge you to get your hands on as soon as you can.

For more about this book, and for links to buy, see the publisher's website here.