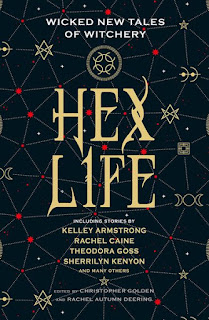 I'm grateful to Titan Books for an advance reading copy of Hex Life to consider for review.

With Autumn coming and you-know-what due at the end of the month (no, I'm not talking about Brexit) it's time for a bit of witchy magic, don't you think? And here to oblige is Titan bringing another of the themed anthologies which they've been on strong form with lately.

The subject is witchcraft in all its glory and horror. Here is a fantastic spread of stories by a whole gathering of (almost entirely) women writing at the top of their game. What do we think of witches witchcraft? It's a contradictory and tricksy subject, taking in the traditional, menacing stereotype and more recent attempts to reclaim it as a spiritual practice. Either way there seems something intrinsically liminal here - whether as a tool and resort of the marginalised, a hidden sisterhood or a countercultural force. So, a fitting subject for an anthology, allowing a diversity of voices and themes. These stories cover a whole range from evocations of traditional, fairy-tale witchery to urban fantasy variants to stories of revenge, modern life with a little magic, and even the dystopian future. Truly you can find witches everywhere!

Reading this volume is also a great way to taste the work of a diverse group of writers, hopefully to follow up with their other output (some of these stories are set in the authors' wider fictional worlds, others are standalone) and to sample a range of genres (witchcraft doesn't have to equate to horror - though it certainly can!)

In the first story, An Invitation to a Burning by Kat Howard, it is Sage who receives the invitation, in Merrinvale, a town that 'burned its witches, when it found them'. You'd expect an anthology like this to survey not only the powers of witches but their potential fate, wouldn't you?

Widows' Walk, in contrast, by Angela Slatter, looks at a group of widows who are much more integrated into their community (even if some people do cross the street rather than pass their house). The four women that this story centres on perform various services for their neighbours, even some that are, maybe, not strictly natural - but how will they respond when a young woman is caught stealing their milk?

Kelley Armstrong's Black Magic Momma: An Otherworld Story is distinct again, more of a classic urban fantasy in which single mother Eve supports her daughter by trading in dodgy magical artefacts and spell books, crossing the paths of various supernatural and natural enemies. It's almost hard-boiled, a fast paced and twisty tale which was great fun to read, packing a lot into a few pages.

The Night Nurse by Sarah Langan is more sinister. Esme is a desperate young New York mother who just given birth for the third time. Her career on hold, her nights sleepless, her husband high-earning but often absent and definitely unwilling to do his share of the feeding at 2am, she gratefully accepts the help of "Night Nurse" Wendy who has her own medications and ways with the kids. This story genuinely unsettled, leaving that residue of unease that characterises classic horror.

Stories about witches don't have to be confined to the present, or the mediaeval past as Mary SanGiovanni shows in The Memories of Trees - which opens in a very traditional way but then swerves into a post-apocalyptic future where the fear and hatred roused by the catastrophe is channeled, as ever at women on the margins. A particular;arly sharp story, I felt, at the present time.

Rachel Caine's Home: A Morganville Vampires Story brings a witchy element into her wider universe - why would the vampires be so afraid of a single woman? Here the witch is playing her familiar as a threat to the established order, but what is she really after? An intriguing episode which will I'm sure gain resonance from familiar characters.

The Deer Wife by Jennifer McMahon recognises that the word "witch" may be applied to figures across cultures and she produces a wonderful blend of the Northern European tradition - a woman in a remote hut in the forest - with something more rooted in her North American locale - shapeshifting and an ease with the wildness of the forest (rather than it being a dark menace). Transgressive in several different ways, this rather sweet story was another of my favourites here.

Kristin Dearborn's story The Dancer seemed at the start to be another tinged with urban fantasy, as Paul Baker, who seems to be a supernatural trouble shooter of sorts, drives to meet a new client. But it turns into so much, exploring themes of anorexia and familial abuse - and ending on a genuinely ambiguous note,

Bless Your Heart by Hillary Monahan also touches on some very modern issues as single mother Audrey tries to protect her son, Tucker, who 'preferred barbies to GI Joe and crafts to sports' from endless years of homophobic bully, encouraged, or at least tacitly endorsed, by the mother of the chief offender who - rather than take her own son in hand - business herself having library books 'challenged' and pursuing other illiberal causes. A fairly simple story of revenge, I found Bless Your Heart very cathartic!

The next story, The Debt, is much darker. Ania Ahlborn takes us back into the woods - the deep, primeval woods of Poland where mushrooms grow from shallow buried corpses, the last wild bison roam, and one could believe in an ancient witch living in hut on fowls' legs... This is a story that will stay a long time in my mind. Also dark is Toil & Trouble: A Dark Hunter-Hellchaser Story written by Sherrilyn and Madaug Kenyon and I think set in Sherrilyn's wider Dark Hunter universe. Drawing on Shakesperian elements (MacBeth's witches) this unpicks the correspondence between those 'secret, black and midnight hags' who became so characteristic of what we imagineer witches to be and the three Fates.

Last Stop on Route Nine by Tananarive Due is another story that engages with recent history, explicitly drawing on the recent treatment of people of colour in the US South. Ideas of curses, disappearances and random, hateful attacks gain an even sharper edge when mixed up with hauntings and magic. This story has a real sense of enduring evil, making the point that witchcraft is not always a resort of the oppressed but can also be made into a tool of the powerful.  Another of my favourites (if that's the right word for something so grim!) Haint Me Too by Chesya Burke has similarities - in its theme of racism and privilege - but is set in an earlier, even more violent time and here in contrast the witchcraft is something of a refuge for the downtrodden - if a slippery and tricky one, ever prone to blow back.

Rachel Autumn Deering's Where Relics Go to Dream and Die is something of a love story, which while dark in places was rather sweet in its overall effect, the witchcraft here serving both to hurt and help. A nice story.

This Skin by Amber Benson describes what happens following a multiple murder. It's unusual in this book in that the witchcraft is implied, perhaps uncertain: we have different explanations for what's happened and perhaps an unreliable narrator. What really did happen in the gym?

Helen Marshall's The Nekrolog is a lovely and tender story about the lives of two cousins, one living in Canada, the other in Ukraine, whose families have lived through tumultuous events (there are some well observed glimpses of the uncertainty that comes form living a life in exile). The cousins suffer various tribulations, and share some significant moments with one another - but something is not quite as it seems... the thrust of this story is not primarily "witchy" although that turns out to be a ket ingredient, but it's a lovely piece on the lives of women. Another odd my favourites in this collection.

Alma Katsu's story Gold Among the Black is about a girl and her dog. And that's all I am going to say. It is a very short story and I don't want to give away anything.

The final story in the book, How to Become a Witch-Queen by Theodora Goss, gives us not only two rather magnificent witches but effectively hacks into one of THE classic fairy stories to tell us what happened next and whether "she lived happily ever after" (spoiler: she didn't, but she did well enough for herself). See if you spot which one is behind this. Goss has, though, written a cracker of a tale to round off this engaging and deeply readable collection.

In short I'd strongly recommend Hex Life and that date in October coming, it wold make an excellent present for many witch-minded friends.

For more information about this book, including links to buy it, see the publisher's website here.
Email ThisBlogThis!Share to TwitterShare to FacebookShare to Pinterest
Labels: 2019, anthology, Fantasy, magic, witchcraft, women