#Blogtour #Review - The Art of Murder by JS Strange 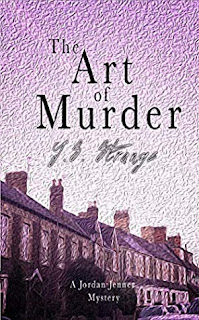 I'm grateful to Panther for letting me have a free advance e-copy of The Art of Murder and for inviting me to take part in the blogtour.

Jordan Jenner is back!

Yes, the reclusive, cat-owning gay private investigator from Cardiff returns to the page with a new murder mystery. Following the events of Death on the Rocks, which took place over a (very bleak) Christmas it's now April but while you might be expecting green shoots and new life, it's not quite like that.

Jordan's brother Ashley is still sleeping on the sofa, with Jordan no nearer understanding why he has left his partner, Ben. Perhaps a city break in Amsterdam may help the two relax? It's not to be, since they catch the attention of... someone... over there and on return, Jordan finds himself in the middle of very sinister goings-on centred on Cardiff's art world.

Events which culminate in murder.

As with Death on the Rocks, there's a personal angle to this - Jenner has been hired by one of the artists at the focus of the scandal, and soon finds himself having not only to investigate a death, but also to pin down the identity and motivations of a fringe group, the 'Dirty Dollys'. This mysterious cabal is a rather brilliant creation of Strange's - they act as a pack, targeting popular, up-and-coming artists with fraud and blackmail. Are they an artistic movement? In it for the money? Is it political? How far might they actually go? Nobody seems to know, so the threat to Xander Draper - the darling of the Cardiff art market - has to be taken seriously.

At the same time, someone is following Jordan. Someone seems to know where he lives. This has got very personal - even more so that in the first book, where Jordan's mother became embroiled.

I liked this story, it's fast-paced, continually throwing things at Jordan. We get to see more of his personal life - credit should go to Strange for writing books where the gay characters are many and diverse - and he's a fascinating mass of contradictions, a but of a loner and a grump perhaps but likeable and understandable. He's certainly a long way from being the stereotyped antisocial detective. Jordan is more at the centre of this book in some respects because, while the police are involved, he's no longer an external consultant to them (budget cuts). He also has his own client involve din the case, giving him a slightly different agenda from the official police. That makes him less part of a team and leaves more for him to do.

I found the Dollys (the spelling is deliberate) an intriguing group, the whole setup - artists picked off and subject to harassment in the full light of day, as it were - having something of the sulphurous edge of a Margery Allingham story. This book is completely naturalistic, there's nothing supernatural here, but the drive and motivations of the villains (if that's what they are) does have an almost metaphysical cast.

Strange has a style that grows on you - sometimes it feels as though it could do with a bit of polish, and it may not be to everyone's taste, but in my view there is lots of smoothed down writing out there, lots of bland stuff that reads pretty much the same and this one (with its predecessor) has something distinctive which is actually quite rare and precious.

Overall, a welcome return to the world of Jordan Jenner which left me wanting more.

You can buy the book from Amazon here. The publisher website is here. The blogtour continues with sone excellent reviewers - check out the poster below! 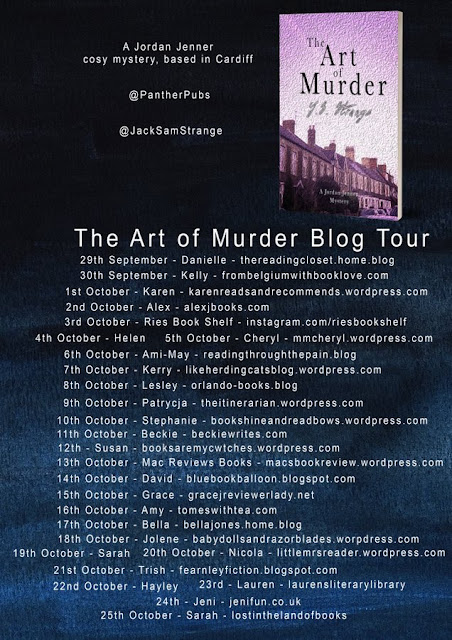