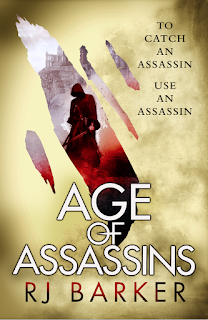 Age of Assassins, as the title suggests, is thoroughgoing fantasy. I don't normally go for cloaks, blades and so forth, so I did approach the book sceptically, but the sheer verve of the writing, the portrayal of the characters and the depth of the worldbuilding won me over - as did the taut, suspenseful plot.

Girton Club-Foot is an apprentice assassin. He can effortlessly deploy all the Iterations needed to kill (The Quicksteps, The Precise Steps, The Maiden’s Blush and so on) as well as using tricks such as The Whisper That Goes Straight to the Ear and being able to pick a lock even when balancing in a stream or ordure. He's also pretty nifty with a longsword/ stabsword combination, despite his disability.

This is all courtesy of his Master, Merela Karn, who rescued him – bought him – from a slave auction as a boy and has raised him since, providing the only home he's ever had, albeit a shifting, dangerous one, and teaching him her deadly craft. (Merela maintains there's an element of justice in the choice of their victims, but still...) The relationship between them is well done, respect mingled with (unspoken) love and an undercurrent of adolescent rebellion. I wanted to know more about them, but Barker keeps things teasingly vague and despite glimpses of backstory – how the two met, his first kill – the heart of this book is the present, as the two killers seek to infiltrate Castle Maniyadoc for their latest commission.

The world they live in is grim.

In the Tired Lands the line between villager and bandit is often drawn by the hunger of children.

The Lands suffer a blight ("souring"), apparently caused by magicians in the past: consequently, magic is persecuted and spellcasters, once captured, are literally bled dry to redeem the “soured” ground as are criminals, the old and anyone else who displeases the feudal rulers.

It's one of these rulers that Merela and Girton end up commissioned to protect, going undercover in Castle Maniyadoc to discover who is threatening Prince Aydor (this takes Girton into the heart of a group of trainee knights, a setting where he has to conceal his fighting prowess and cope with bullying and teenage rivalry). The problem is, almost everyone would be happy to see the spoiled, brattish Prince dead. Motives abound, not only personal but political, and the whole thing is complicated by the arrival of the travelling Festival which provides a cover for a multitude of killers. Oh, and a series of deaths starts which may or may not be linked to whoever is threatening Aydor.

So essentially this is a mystery story, albeit one involving some thrilling combat, the interference of dead gods, betrayals, devious politics and - in the end - a most unlikely enemy. To cap it all, Girton falls head over heels in love - his first time, distracting him from his mission. And there are secrets Merela knows about Girton that will shake his world – just as she has history which will astonish him. Will this split them apart just when they need more than ever to be able to trust one another?

Set against the background of a decaying empire (from the empty yards around the castle to the yellow, soured earth itself) and pulling no punches about the grinding oppression and misery of the feudal order, this novel skilfully avoids cliches and creates some truly great characters, friendships - and enmities.

And it's only the first confession of the murderer, Girton Club-Foot. I'm already looking forward to more.