Review - The Witch at Wayside Cross 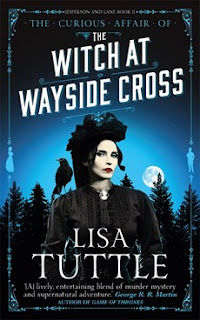 Jesperson and Lane have just solved their first major case when a man bangs violently on their door - and almost immediately drops dead. The police rule death by natural causes, but the detectives are determined to find out what really happened.

Mr Manning was screaming about witches before his death....

If you loved the first Jesperson and Lane book, The Somnambulist and the Psychic Thief, you'll enjoy this - though Tuttle has written a rather different story, it's every bit as good.

While The Somnambulist and the Psychic Thief was very much an action story with lashings of penny dreadful menace, this is a slower, more reflective book. It particularly showcases the abilities of Miss Lane: indeed, while Jesperson comes and goes on a rather erratic schedule, much of the discovery is driven by Lane and her ability to get alongside the inhabitants of the various dwellings - whether vicarage or wise woman's abode - where the clues to Mr Manning's death may be found. (My wife being a vicar, I was rather alarmed at the idea - which I think is accurate for Victorian days - that strangers could just turn up at a remote vicarage and expect to be put up!)

The story that Lane draws out is fascinating, much of the book gradually exposing the range of views that Victorians might hold on witchcraft, cunning-men, fairies and the like. The Norfolk that Jesperson and Lane visit is a mesh of rivalrous arcane practitioners with Manning himself having been involved in something called the "School of British Wisdom" whose purpose is to revive the learning of the "druids". They, and pretty much everyone else our duo meet, have all sorts of views on the so-called "screaming pits" to be found in local fields and woods, as well as different attitudes to witchcraft, whether historical or modern. The book is a reminder - like The Somnambulist and the Psychic Thief - of the spread of opinion about the supernatural, and the blurred distinction between that and science, that obtained then. Like the Victorians, we're in real doubt whether or the events have a "natural" explanation (or even what that means).

The key to Manning's death is apparently located somewhere in this complex web, which also draws in a missing baby, poisonings and the "good neighbours" (nothing to do with Ramsay St). But there are many false turns, misleading theories and a startling lack of hard evidence, so it's a tough case to crack with surprises right to the end.

As I said earlier, there is less action in this story than in the previous book, and I felt at times that the conversations over tea in drawing rooms used, especially in the first half, to establish the facts of the case teeter on the edge of becoming long-winded. Teeter, but don't fall over - Tuttle avoids that, not least because alongside the investigation, there are darker veins running through the book.

First, she maps the attitude of men towards women, seeing them as means to ends, whether those are commercial, such as obtaining property, or more "spiritual". This attitude comes out quite nakedly on a couple of occasions but is always simmering away. It's something Lane is alert to, and even the presence of her friend Jesperson makes her uneasy at one point:

"His eyes glinted in the moonlight and I suddenly felt unaccountably nervous, and looked away at the empty, tree-lined road ahead".

Apart from a sense of menace, the books shows women not being listened to. Often, men whom Lane is asking question of respond to Jesperson instead, and at one point we're told, "...the men were not so ready to believe she knew what she was talking about..." These moments give the story a real bite, counterpointed, of course, by the recurring debate about witchcraft and the treatment of women regarded as witches.

As well as the treatment of gender, there are also some carefully observed class attitudes. One may draw a comparison between the treatment by the Rev and Mrs Ringer of their servant, Maria, and the superstitious attitude to the fairies (those "good neighbours"). You mustn't, you see, acknowledge or thank the fairies of they do you a good turn. Similarly, Maria's toil in the kitchen goes unremarked: when she's ill one evening and Jesperson and Lane do the work instead, nobody remarks on it. I'm reminded of George Orwell's observation of old women carrying firewood in North Africa: that it was just wood going by.

So, within this apparently charming and engaging fantasy crime novel, there is a good deal of shrewd social commentary.

Overall, a solid follow-up to The Somnambulist and the Psychic Thief, showing that Tuttle isn't simply planning to repeat a successful formula - popular though I'm sure that would be - but is letting this series evolve. I wonder what she'll do with it next?