Review - The New Voices of Fantasy 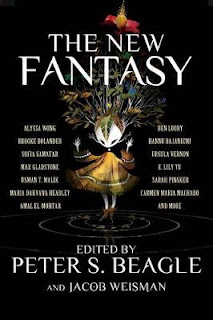 It was fun to read a themed SFF anthology that wasn't themed, if you see what I mean - not a book about magic, ghosts, the apocalypse (given current events I'm especially glad it wasn't about that) but which still had a focus: showcasing new voices. These are writers who've perhaps had a few stories published (in the case of Rajaniemi at least, a trilogy of novels) but who are still bringing something perceptibly different to the table - whether that be content, point of view or who they are.

Of course, what you regard as "new" will depend where you've coming from and what you read. For the record, I'd only heard of three of the authors here (Wong, Gladstone and Rajaniemi) before and I'd only read one, so for me, the book presented a lot of really new stuff and I look forward to following up many of these authors. Others may have encountered more of them before, but it's such a wide ranging collection that I hope everyone will see something new or different here.

So - what of the stories? They range from the apparent simplicity of the fairy story or fable ("Duck","The Cartographer Wasps and Anarchist Bees", “The Pauper Prince and the Eucalyptus Jinn”) to knotty horror ("Hungry Daughters of Starving Mothers", "The Haunting of Apollo A7LB") to fantasy romance (“The Tallest Doll in New York City”) adventure (“My Time Among the Bridge Blowers”) and all points in between. Many are multilayered, reflective stories - see for example how "Pauper Prince" and "Bridge Blowers" in particular both echo and critique the kind of story they appear, on the surface. There is a lot of dialogue with the existing body of SFF work going on here, though it doesn't stop the stories themselves being immediate, entertaining and fun.

In "Hungry Daughters of Starving Mothers" (Alyssa Wong) the balance of power - and danger - between Jen and the (frankly repellent) men she dates swings back and to, only made less stable by her supernatural abilities. Wong deftly wrongfoots the reader about where it is all going, creating something very disturbing indeed

"Selkie Stories are for Losers" (Sofia Samatar) plays games with the traditional selkie story, the unnamed protagonist both retelling examples of the story and embodying them (or is she?) It's a sweet, touching story in places ("Mona gets out, yanking the little piece of my heart that stays with her wherever she goes") but we don't know if there's a happy ending or not.

"Tornado’s Siren" by Brooke Bolander also has romance, and dash of humour as a tornado falls for Rhea (and why not?) Bolander makes this far fetched idea totally plausible and creates in Rhea a determined and self possessed hero who the reader is cheering on by the end. It's also pretty sharp: "You can't fall in love with destruction. What would that say about a person?"

"Left the Century to Sit Unmoved" (Sarah Pinsker) was my very favourite of these stories. It's an intensely moving, deeply imagined, account of a local place (a pool) and a custom (diving in from the top of a waterfall) that may or may not be linked to a series of disappearances - of what this means to one of the left behind, and of how the community bends and grows around the unexplained, like a tree enclosing a railing. Just mesmerising - at the same time totally mundane, and totally entrancing.

"A Kiss with Teeth" by Max Gladstone is a monster, rather than a horror, story, an imaging of how a vampire might fare in a domestic setting which - at the same time - has clever things to say about modern life, loneliness, the city... and even the plight of the overworked teacher. I don't think I'll soon forget the glimpse of tired Angela, in her one room apartment, at the end of a long day.

"Jackalope Wives" (Ursula Vernon) is another fairytale, loosely Native American in setting, almost a counterpoint to "Selkie Stories are for Losers". Here the transformed beast is rather different but the dynamic - about possession and control, about taming the wild - is the same. An old story in some ways but one that never stales.

"The Cartographer Wasps and Anarchist Bees" (E Lily Yu) reminded me of Animal Farm. It's a sort of fable, a story of bees and wasps, of colonialism, survival and evolution, very much a fable, deeply thought provoking and I think a tale one could return to again and again.

"The Practical Witch’s Guide to Acquiring Real Estate" (A. C. Wise) has  more than a dash of humour as it informs the reader of all the ways to become a homeowner. But it becomes clear that for a witch, this isn't a matter of simply paying for a house - quite apart from the attendant dangers of local prejudice (which are spelled out in an almost unbearably sad section). No, it's more like a courtship, always with the possibility of heartbreak. Funny, yes, also sad and wise.

"The Tallest Doll in New York City" by Maria Dahvana Headley is a mesmerising little love story, set, of curse, on St Valentine's Day. Note perfect, it tales an outrageous concept and makes it works so well.

"The Haunting of Apollo A7LB" (Hannu Rajaniemi) is either a ghost story, or science fiction, or probably both. Apollo A7LB is a space suit displayed in a museum, and it seems that it's not as empty as you'd think.

"Here Be Dragons" (Chris Tarry) isn't really about dragon hunting. It's about domesticity, building a life and raising kids - and maturity. And immaturity. A very odd story, a very old story in many ways but perfectly told and among my favourites here.

"The One They Took Before" (Kelly Sandoval) might be part of an emerging genre, portraying what happens after the cool events of the fantasy story. I thought of Seanan McGuire's "Every Heart a Doorway" or Alan Garner's "Boneland" - both books that, in very different ways, explore the trauma of the survivor, as Sandoval does so well here. A striking and poignant story.

"Tiger Baby" (JY Yang) is, I think, about becoming oneself - and how this might not be quite what you expect - perhaps a common theme but here it's done in such a hauntingly beautiful way while also being so prosaic, centring on the day to day details of a life. Another of my favourites here

"The Duck" (Ben Loory) is about a duck, about love, about devotion... VERY fairytalelike, very beautiful.

"Wing" (Amal El-Mohtar) is a story about books, and people, and finding the right person, and the right book. A gem, and another of my favourites.

"The Philosophers" (Adam Ehrlich Sachs) is actually three stories, which look at aspects of the father-son relationship, making metaphors literal - about communication, about identity and being your own person - and inviting the reader to really think.

"My Time Among the Bridge Blowers" (Eugene Fischer) sees an explorer - perhaps not in our world - visiting  a remote people who have an amazing talent. Can he bear to simply watch and wonder or will he interfere, setting in train future trouble for this already suffering tribe?

"The Husband Stitch"(Carmen Maria Machado) is a profound story that, slightly, broke my heart. It's a story of a life, with very little overt fantasy to it but... something... lurks in the background. One detail. One flaw in a relationship. Can you see it? Can you touch it? Will it matter, in the end?

"The Pauper Prince and the Eucalyptus Jinn" (Usman T. Malik) is the longest story in this book, practically a novella. It tells of a princess, a Jinn and a family legacy, drawing on a rich vein of Islamic folklore is a fresh and arresting way and using this to comment on the lives of modern-day Pakistani Americans. An absorbing story.

The collections as a whole is very strong, with something for everyone. They are all great stories, though different readers will have their favourites. Whether as a solid collection in its own right or as a sampler for these authors, I'd recommend this to anyone interested in where fantasy is going.