In a warren of crumbling buildings called the Old City, a hospital echoes with the screams of the poor souls inside. Inside, there is a woman. Her hair, once blonde, hangs in tangles down her back. She doesn’t remember why she's in such a terrible place. Just a tea party long ago, and long ears, and blood...

Then, one night, a fire at the hospital gives the woman a chance to escape, leaving her free to uncover the truth about what happened to her all those years ago.

First, I should say this isn't Lewis Carroll. No way. This Alice isn't the sunny, slightly perplexed heroine who on a dreamy summer's day followed the Rabbit underground, had delightful adventures and was home before dark.

Rather, she's a woman who was betrayed, traded and abused: taken into the heart of the Old City where women seem to be little more than the playthings (and worse) of the bosses who run the place.

Alice is also, though, the woman who carved her way out of the Old City, knife in hand, covered in blood. She was locked up in a grim asylum for ten years, forgotten by her family, dosed on "powders" and starved of hope. But she survived.

You might says she has unfinished business - with the Rabbit, with the others.

If only she could remember exactly what it was...

This is a remarkable book. There is the reimagining of a classic story - not a trip to Wonderland but rather to a nightmareland, a kind of evil twin, twisted and brutal but complete with little cakes, size changes, mysterious coloured bottles of medicine (even butterflies). Everything - even the fantastical - is well realised and scarily convincing. More, the central characters are credible, fallible and compelling.

Alice herself is battered and hurt, but she keeps getting up and going on, with a little help from her friend, Hatcher. She refuses to fail: she also refuses to let what's been done to her drive her to mere revenge. A recurring motif as she and Hatcher struggle through this book is Alice's desire to free those she encounters - the other unfortunates in the asylum, women imprisoned in the dives of the Old City, even a mermaid. Sometimes she can do something, sometimes she can't, but she never loses the will to try.

And Hatcher. What can I say about Mad Hatcher? He hasn't given up on revenge. Sometimes a red mist descends: sometimes we see why he, too, was locked up for ten years. How he got his nickname. And we learn what he has lost. Together, he and Alice are a formidable pair, both desperately vulnerable yet also so strong. In the asylum, they keep each other sane (sort of). Together they escape and support each other. Yet Alice has no illusions about Hatcher: there is a thing that sometimes seems to possess him, and she may not always be able to bring him back...

The Old City is a truly vile place, fought over by gangs, sometimes street by street, shut in (the folk in the New City don't want any of the contagion to escape) and vast in scope, taking days to cross. When that asylum burns to the ground, and Alice and Hatcher are left homeless, marked out as escapees by their hospital gowns, their future looks bleak and indeed the gang soldiers soon close in. Alice rapidly learns that the one thing you don't want to be there is "interesting". Yet there is also kindness and refuge to be found there, albeit fragile and fleeting.

Beginning as a quest for survival, turning into a hunt for the monster that escaped the asylum with them, this is an adventure with great zest, a book that simply makes the pages fly past. While it is grim in places - and explores some dark themes - Alice's determination not to be dragged down, and the continual, bizarre glimpses of Carroll's story, set that grimness off just enough for me (though I think there are scenes that could be triggering for some) and provide a glimpse of light at the end.

And did I mention that Alice and Hatcher are actually hunting the Jabberwock?

This is truly original, truly strange and above all, a great read.

Best of all, like its forerunner, the story isn't all done: there is a - a sequel, The Red Queen, coming very soon:


The land outside of the Old City was supposed to be green, lush, hopeful. A place where Alice could finally rest, no longer the plaything of the Rabbit, the pawn of Cheshire, or the prey of the Jabberwocky. But the verdant fields are nothing but ash—and hope is nowhere to be found. Still, Alice and Hatcher are on a mission to find his daughter, a quest they will not forsake even as it takes them deep into the clutches of the mad White Queen and her goblin or into the realm of the twisted and cruel Black King. The pieces are set and the game has already begun. Each move brings Alice closer to her destiny. But, to win, she will need to harness her newfound abilities and ally herself with someone even more powerful—the mysterious and vengeful Red Queen...

For more about Alice, see here.

Next stop on the blogtour: Off With Her Head 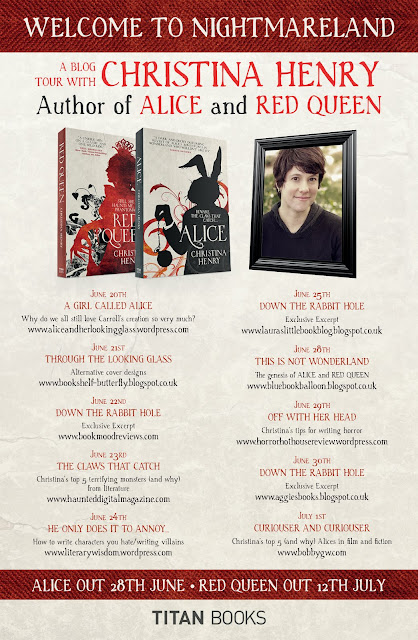