Last Call at the Nightshade Lounge 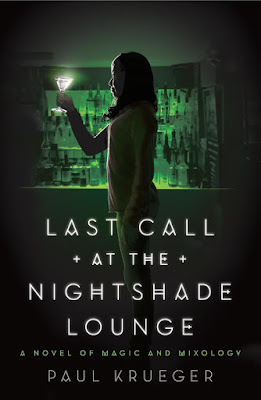 College grad Bailey Chen has all of the usual new-adult demons: no cash, no job offers, and a rocky relationship with Zane, the only friend still around when she moves back home. But her demons become a lot more literal when Zane introduces Bailey to his cadre of monster-fighting bartenders. It turns out supernatural creatures are stalking the streets of Chicago, and they can be hunted only with the help of magically mixed cocktails: vodka grants super-strength, whiskey offers the power of telekinesis, and tequila lets its drinker fire blasts of elemental energy. But will these supernatural powers be enough for Bailey and a ragtag band of mixologists to halt a mysterious rash of gruesome deaths?

Though I love Edward Hopper's painting Nighthawks and his other depictions of nighttime urban life, you won't generally find me out late. (The place I live is so rural it is proud of having no streetlights). So I wasn't sure how I'd take to a book whose premise is the secret history of Chicago's late night cocktail bars. I'm pleased to say though that I enjoyed it immensely.

Placing expert bartenders in the front line of humanity's struggle against the unseen horrors may seen unlikely, but pour yourself another drink and think about it. What are these modern mixologists but wizards, alchemists, brewing up potions based on lore painfully discovered and preserved over the ages? Moreover, they preside over the strange rites of the night that Hopper painted, visible in the corner (or just out of shot) tending the lost, the sad - and those mainly out to get off their faces. Who better to slip out into the dark and face the fearsome tremens which feed on the inebriated who are staggering home? (And yes, a pack of tremens really is a delirium. The book has humour. Deal with it).

It all works rather neatly - buoyed by the way Last Call at the Nightshade Lounge never takes itself too seriously. Bailey Chen is newly graduated, looking for a job in a whizzy tech startup that will take her to fame and fortune rapidly. Instead, she's stuck cleaning up in the Nightshade Lounge, courtesy of Zane. Though he gave her a job, there's awkward history between Zane and Bailey - history that becomes even more awkward when his girlfriend Mona shows up. So perhaps drinking the wrong drink late one evening in the Nightshade wasn't the best thing to do... but how could Bailey know that?

Once Bailey's introduction to the secret world is effected, this book moves at great pace. Monsters appear and are dealt with: more monsters appear and challenge our heroes: cracks begin to appear in the bartenders' world suggesting something very nasty is afoot. In a way the details don't matter, what's special here is the richness of the setting, the dash of humour (it's a bit of a send-up of the whole genre - but not too much of one) and the way that Krueger shakes things up. There may also be a little something in the mix that he's not telling about - hopefully future books will make that clear. The result is refreshing, slightly bitter and definitely leaves the reader wanting to place another order.

A particularly fun feature was the cocktail recipes throughout the book, taken from The Devil's Water Dictionary. The equivalent of those battered tomes of lore detailing spells or nameless rituals which you see through UF and horror, these mundane cocktail recipes apparently have special results when the ingredients and preparation are just right - whether that's the ability to punch a demon's lights out, read minds, fire lightning or even become invisible. Yet they're ordinary recipes as well and if you ever wanted to make an Old Fashioned or a Mai Tai to accompany you on your way through a book, here's the perfect excuse. Just don't read it before driving.

This is apparently Krueger's first novel, but he carries it off with great aplomb and I hope that it's the first of many. I'm sure there are more cocktails to be demonstrated, further hidden depths to nighttime Chicago that can menace, and a lot more to find out about Bailey, Zane, Bucket and - especially - Mona.