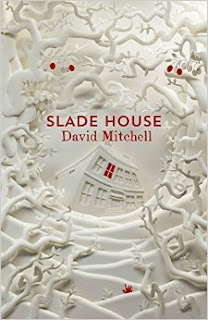 I bought this book from Goldsboro Books.

This was the first book by Mitchell I'd read, although I have The Bone Clocks waiting in my TBR and having enjoyed this I'll move it up. The books are linked - I spotted one or two cross references although not having read the earlier one in no way detracted form my experience with this.

Slade House is a series of linked novellas, involving the eponymous address, set between 1979 and 2015. Fittingly for what is really a horror novel, something nasty happens every nine years at the end of October. The book describes a series of such episodes, all set in the same anonymous town (but, OK, I'm sure it is Reading!) as different souls are brought to the crooked Alley and encounter a small metal door.

First, in 1979, we meet a boy and his mother. Mum is a down on her luck musician, looking for work: her son possibly autistic in his directness. Following directions given by a window cleaner, they find the Alley.

Nine years later, a less agreeable character, a police officer, comes looking. He is followed, in 1997, by a party of students from their University's Paranormal Society (Slade Alley's fame is spreading...)

In 2006, a woman comes looking for that group. And in 2015... well, I'll say nothing specific about that (although you can get some clues from a series of tweets from @I_Bombadil sent in September and October this year. They cease on October 31st).

Common to the stories are a brother and a sister who, in various guises, seem to inhabit the house. Their motives are dark, but we only gradually learn, through the book, exactly what they are up. Not, perhaps, gradually enough: there is one scene in one of the later stories where, just in case we missed the point, it's all explained through a third party - do read the stories in order as it would be fatal to encounter this one first!

That quibble aside, the stories are all eerily effective in their own right with the characters and their backgrounds well done: the boy missed his father after his parents split up, the woman who feels herself n the shadow of her high achieving sister,  the near racist, embittered cop. (Maybe a touch of a stereotype there). And of course, Norah and Jonah.

It's a short book - 233 pages - and one which I think most readers will get through in one or two sittings, perfectly suitable for an evening by the fire as October dies.

And it does have a delicious twist...